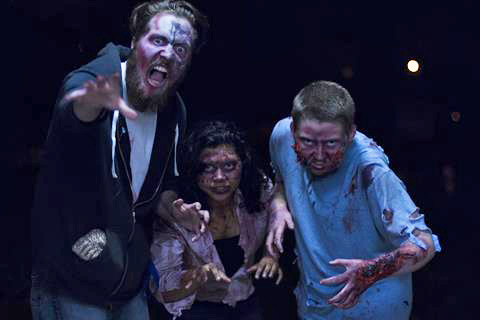 Feeling your way through the dark, dank basement in search of safety, but finding the promise of safe haven shattered by swarms of the undead.

It’s a familiar storyline around Halloween, and it’s one that will play out over and over in downtown Okmulgee.

Students from the Schools of Visual Communications and Nursing & Health Sciences are teaming up with Okmulgee Main Street to offer the Zombie Apocalypse, a walk-through haunted attraction in the basement of the Commerce Building, 115 S. Grand Ave., on the Square.

The three-night event kicks off Friday, Oct. 28, and continues through Monday, Oct. 31, Halloween. It will run from 5 p.m. to 10 p.m. all three nights. The cost is $5 for those 9 years and older with proceeds going to student clubs—the Visual Communications Collective and the Student Nurse Association.

Visual Communications instructor Brian Caldwell said last year a similar event was planned but was rained out. That didn’t dampen the students’ enthusiasm to plan another one.

“This year I had students the first week asking if we were going to do the Zombie Apocalypse again. Same thing with the Nursing students,” Caldwell said. “I want it to be cool enough and scary enough to come back year after year.”

“I am stoked about the event. I love haunted attractions, so this is right up my alley. The best part is having it right here in Okmulgee,” Sumner said, and the event will utilize the basement of one of the most recognizable buildings in downtown Okmulgee.

“I mean, how much scarier can you get than an old creepy basement? It is the ideal location for something like this. Not to mention that several of our old buildings downtown are haunted, which makes it more enticing,” she said.

Aspen Robinson is treasurer of the VCC student club and is also excited about the Zombie Apocalypse event.

“I honestly think it will spooky and awesome. It will definitely give those waiting in like an adrenalin rush since they will be standing outside an old, empty building hearing people scream inside,” Robinson said.

Caldwell said the action won’t be too intense for all ages. Those under 9 years old will be given a glow stick or glow necklace so the zombie actors inside the maze will know to decrease the scares with those groups.

Robinson is also one of the primary zombie makeup artists for the event.

“I actually got into doing zombie makeup when I was 14 years old. I had watched the movie ‘Dawn of the Dead,’ and I vividly remember looking at those zombies’ makeup and thinking to myself ‘I can do that,’” she said.

For those who survive the zombie-infested basement maze, they can get their picture with a horde of movie-ready zombies for $5.

Caldwell said the event will have more than 20 students from Visual Communications and Nursing & Health Sciences working together to make it a scary success.

“I love it that all these different entities are coming together to offer something for the community that’s not expensive,” he said.

Ultimately, the event is a win-win for the university and the community.

“I feel this will be such a great opportunity for VisCom as well as Nursing and OSUIT to get out there and show potential students how fun it is to be going to this school,” Robinson said.

“The most important benefit of partnering with the student groups is the hope they feel like they are a part of the downtown family and the community as a whole,” she said. “We want to encourage them to come downtown to eat, shop and have fun. This is just another way we can reach out to them and encourage them to get involved.”