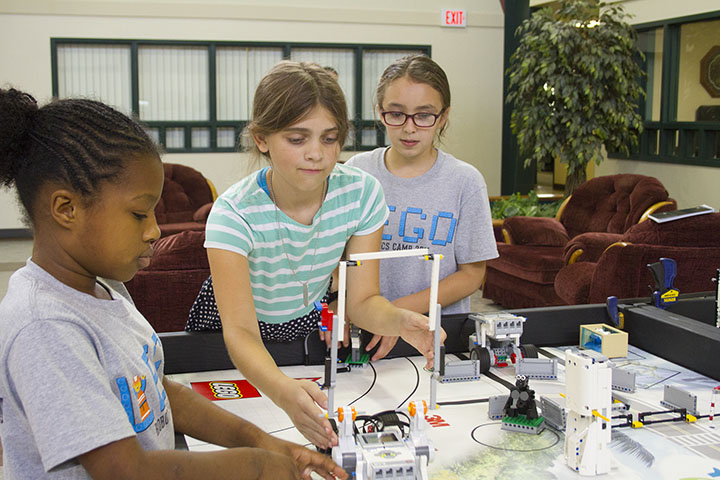 Moving a shark tank, loading crates of milk, even helping a person with a seeing-eye dog cross the street. These tasks, all created in LEGOS and set up like an obstacle course on table tops, were challenges set up for student-built LEGO robots to overcome.

The children, ages nine to 12, worked in teams for three days building and programming their LEGO robots to complete an array of tasks and obstacles. This was the first of two LEGO Robotics Camps offered this summer by OSU Institute of Technology. The first was held June 13 through 15, and the second will be July 11 through 13.

“LEGO Robotics provides students with an opportunity to learn about programming and building robotics on a smaller scale that is fun, engaging, and hands-on,” said Anna Dinsmore, coordinator of Workforce and Economic Development at OSUIT. “By using LEGO Robotics, we are literally putting STEM right into their hands. They get to see their accomplishments first hand and also learn through trial and error.”

The students received a hands-on lesson in engineering, programming and teamwork all through the lens of LEGOS.

Victoria Suddarth, 11 from Okmulgee, said coming to the camp was a surprise from her mother.

“The programming is the easier part; it’s the building that’s hard,” said Suddarth.

It’s good she teamed up with Kaylei Taylor, 12 from Beggs, who wanted to come to the camp because she likes building with LEGOS.

“We make a good team because she’s good at programming, and I’m good at building,” Taylor said. “Our robot pushes a shark tank to the water. We write the program in the computer, and then connect the robot to the computer.”

Dinsmore said summer camps like LEGO Robotics Camp are great because the students are learning, but in an informal, more laid-back setting.

“There is no homework or tests. It’s an environment where the kids can participate to their comfort level,” she said. “My favorite part is seeing a student's face light up when they realize they do have the potential and ability to program a robot. When they do the initial programming and then go test their robot and it begins to move and pick up items, they have this look of pure joy and fascination on their face. You can tell you just opened a student's mind to a future they may have never thought they could obtain.”

Ashley Gaston, 10 from Okmulgee, said she really enjoyed the camp.

“I think it’s really fun. The teachers were really nice, they always appreciate new ideas,” Gaston said. “I really like building and programming stuff. I’m going to come back next year.”

In addition to building and programming their robots, the students also spent time touring areas of OSUIT as well as local manufacturers— Covington Aircraft and CP Kelco.

This is also the second year OSUIT and its partners are offering the summer LEGO Robotics Camps after last year’s camp filled up quickly.

“Through generous funding from the Okmulgee Education Foundation, we were able to increase the number of students per camp from 20 to 25. We also increased the time spent touring CP Kelco and Covington Aircraft. Students were able to spend more time in manufacturing settings and learn how manufacturing impacts their daily lives,” Dinsmore said. “Summer camps like these are not always available in Okmulgee, and to be able to offer these camps at no cost to students throughout Okmulgee County is a benefit not only to the students but the community.”