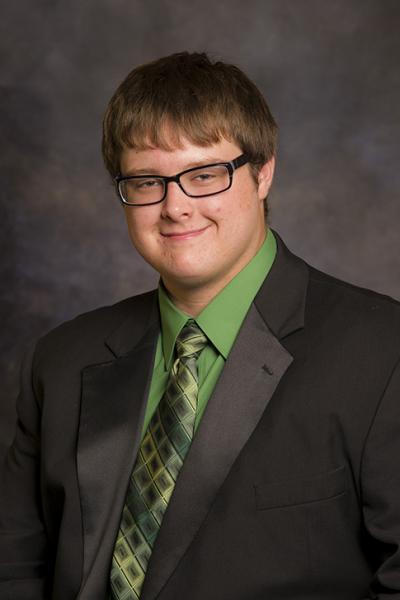 Michael Larson joined 4-H when he was 9 years old so he could show cattle. One of the organization’s tenets is also community service, and that’s how Larson learned about the Ronald McDonald House.

Larson’s work in raising money for the Ronald McDonald House Charities while also excelling as an Air Conditioning & Refrigeration student at OSU Institute of Technology is why he was recently named a Newman Civic Fellows.

The Newman Civic Fellows Award, sponsored by the KMPG Foundation, honors college students who have demonstrated an investment in finding solutions for challenges facing communities throughout the country.

Larson said he learned of the ACR program in the School of Construction Technologies after his cousin graduated from the program. He originally wanted to work on cars, but a shoulder injury meant he had to find smaller machines to work on.

“I didn’t want to sit behind a desk. I wanted to be out doing something, I wanted to do something with my hands,” he said. “I love the program. The instructors see so much potential; they want to help us.”

The same can be said of his work raising money for Ronald McDonald House Charities and Change for Change as well as volunteering with 4-H and FFA.

“Even if it’s something small you can do, it really can help,” Larson said.

His community service went from a requirement to a true calling when he learned a fellow 4-H member was also a patient at a Ronald McDonald House.

“Every time she came back she told us how much the building had changed, how it was growing,” Larson said, and he knows he was part of that growth and change, even if it was a small part. “To actually hear from someone who needs that place, to help someone else, it gives you a feeling of satisfaction and joy.”

Larson said he was proud to learn he had been chosen to receive the Newman Civic Fellows scholarship, which will help him continue his second year at OSUIT.

Roger Shepherd is the ACR program chair and one of Larson’s instructors.

“Michael Larson is an above average student with a wonderful positive attitude and great work ethic. Although he’s not outspoken in words, he’s rather quiet actually, he speaks volumes with his actions, which are very positive,” Shepherd said. “I am excited for Michael, and believe he will represent the Newman Civic Fellows Award and what it stands for very well, not only as a student, but also as an active member of society for years to come.”

Shepherd said it’s every person’s responsibility, including students, to try to make his or her world a better place for others.

“I believe that it is important for every human being to make a difference in society, to add more to the common good than they should ever take. I believe that when students are truly motivated to make a difference in their community, it makes them not only better students, but better employees, better husbands and wives, moms and dads,” he said.  “Michael is training to enter an industry that is built around providing a service to others and putting their needs above his own wants and desires. He will be asked to perform his skills at all hours of the day and in all different kinds of environments.”

Larson said serving his community and others has become a very important part of his life.

“Choosing to help someone definitely makes you a better person,” he said. “Somebody you walk past, you have no idea what they’re going through, so just smiling and saying hello can help them.”