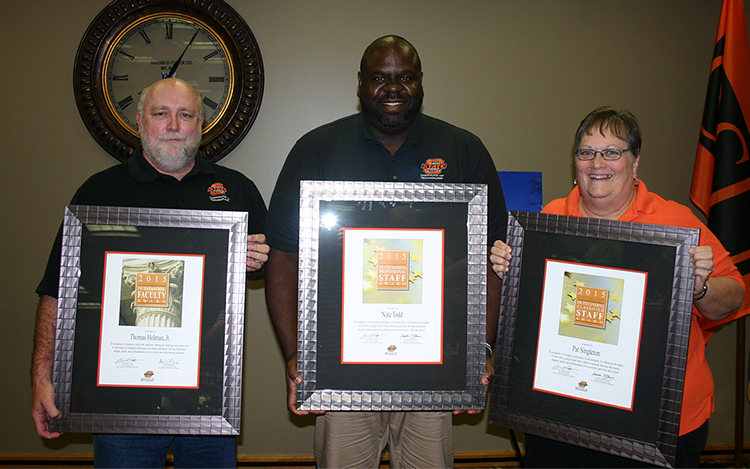 Surprise and shock were words used by this year’s winners of OSU Institute of Technology’s Outstanding Faculty and Staff awards.

The three were recognized at the 2015 Annual Employee Banquet on June 9 in the State Room.

Holman has taught social science courses such as government, history and geography at OSUIT for nearly 12 years. He said he couldn’t believe it when his name was called at the ceremony.

“I felt like Sally Field when she won the Academy Award. ‘You like me, you really like me,’” said Holman. “I was shocked. I feel very honored.”

Singleton, who has worked at OSUIT since 2006, shared his sentiment when she was named non-exempt Outstanding Staff member.

“As my peers stood and applauded, I was truly honored and humbled,” she said. “It is a great honor to be chosen for this award.”

Todd has been director of Prospective Student Services for three years and couldn’t believe he won.

“I was shocked. The other two people who were nominated with me are fantastic, phenomenal people who have done so much for this institution,” Todd said, referring to fellow exempt staff nominees Paula North and Jalynda Bailey. “These people are professionals who make this school a better place and I look at myself and I’m just trying to get by.”

Holman had a similar reaction when he learned he was nominated.

“I felt there are far more people worthy of this than I am. Don’t get me wrong, I’m honored, but I didn’t think I would win,” he said.

All three said the award is affirmation of the work they do.

“You come in and do the best you can do in your position, but you’re not looking for any kind of recognition. It’s nice someone noticed that I’m trying to contribute,” Todd said. “This is a fantastic university. I’m glad I work in a place that values their staff and faculty.”

Holman, who is retired from the U.S. Air Force, said the award validates his priority of educating, not just passing, his students and holding them to a high standard.

Singleton said she’s humbled to now join the list of past award winners.

“My predecessors have been people I have looked up to and have had the privilege of working with over the past nine years,” she said. “I consider it a honor and requirement to live up to the standards of an Outstanding Staff winner— to serve as a role model for other staff members and be an ambassador for the university. To not only tell others, but show others what a great place OSUIT is for students and employees.”