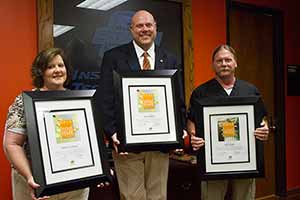 The Annual Employee Banquet once again recognized OSU Institute of Technology’s faculty and staff for their service, dedication and merit.

The banquet was held June 5 at Five Oaks Lodge in Jenks. Awards were given for Outstanding Faculty, Outstanding Staff exempt and non-exempt, as well as recognition for years of service.

All three said they were surprised when they found out they had been selected.

“I was quite shocked to be honest. I didn’t have any expectation of being chosen,” said Madden, who has been an instructor in the O&P program since 2010. “In a way, it is a confirmation for me that my transition from industry to academia was the right decision to make.”

Before coming to OSUIT, Madden worked in the orthotic and prosthetic profession for more than 30 years as a technician and practitioner’s assistant, then a practitioner and business owner, but his experience with orthotics and prosthetics began long before then.

“I was first introduced to the prosthetic profession at the age of 7 after undergoing a hip-disarticulation amputation,” Madden said. “After high school I attended community college until a spot opened up in a prosthetic technical program in Minnesota.”

Even though she works in the President’s Office, Van Hooser said she feels her job is to help anyone who asks.

“I believe in providing good quality customer service to my co-workers as well as the students. Therefore, I have tried to be proactive in assisting anyone who reports directly to Dr. Avant in order to make the office run smoothly and efficiently,” she said.

Of this year’s winners, DeBock has been on the Okmulgee campus the longest, starting at OSUIT in 1999 as the Student Life Activities, Wellness and Intramural Sports coordinator. Now as director of Student Life, his responsibilities have grown to include student retention, emergency management, behavior consultation team and chief conduct officer.

“OSUIT is a unique and remarkable institution of higher education. We are student- centered, job-focused and use the opportunities of education to inspire professional and personal growth of each student who calls OSUIT their campus home,” he said. “I have served our campus community since 1999, and the students and employees of OSUIT still find ways to surprise and encourage me.”

All three said winning the recognition was just icing on the cake after being recognized by their peers.

“Even if I had not won the award, the nomination itself is a great honor because it shows that my co-workers have confidence in my skills and personal attributes to serve the campus community,” Van Hooser said.

“When those who stand beside you laboring to make a difference in the lives of our students recognize your efforts as an outstanding value, that recognition is one to be treasured for certain,” he said.

The other Outstanding Staff nominees were Karla LaMunyon, John Reed and Stanley Teague.

“I truly believe that each of the five other nominees were equally deserving of this award; that is why I was so shocked when I was chosen,” Madden said. “There are so many exceptional people here at OSUIT. I am inspired as I work alongside them and as I interact with them. Their tremendous dedication to what they do is one of the reasons I feel so committed and invested in the co-labor of seeing students at OSUIT succeed.”