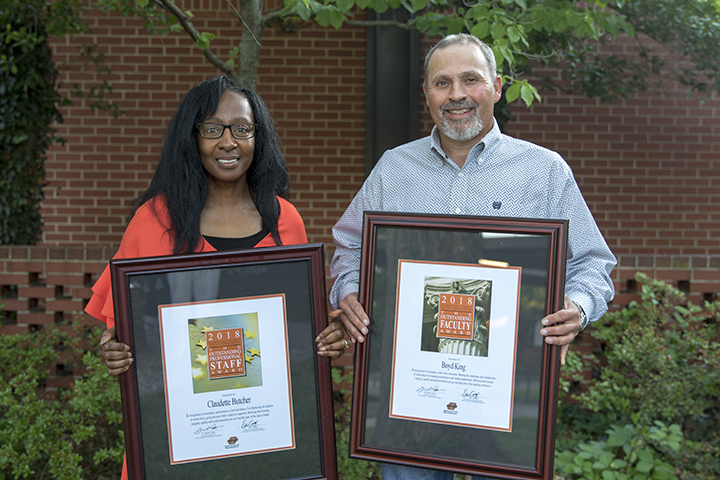 OSU Institute of Technology has always been close to Boyd King.

“I grew up about two blocks from here, around the corner,” King said. “I had two older brothers go here, all of us through the ACR program.”

King returned to his alma mater first to work on the campus’s HVAC systems in Physical Plant before moving into the classroom as an instructor.

He was rewarded for that dedication at the employee banquet where he also was recognized for 20 years of service.

“It’s very rewarding. I’m very humbled and very, very blessed,” he said. “The fact that students would take it upon themselves to nominate me, it’s a big honor.”

King wasn’t alone. Two of his fellow ACR instructors were also nominated for the award.

“It was rewarding to have us all nominated at the same time,” he said. “With teaching that long and having so many students, you know you’ve made an impact on some of them.”

He knows because he remembers the influence teachers had on him when he was a student.

“The faculty here impacted my life so much,” said King, who also celebrated 12 years as an instructor. “I love it; it’s a calling.”

If you’ve walked into the Office of the President, you know the welcoming smile and gentle voice of Claudette Butcher.

Butcher has been at OSUIT for nine years and works as the executive assistant to the president.

“My role is to effectively assist Dr. Path in his role,” she said. “Assisting pertains to more than the day-to-day tasks, it also includes the responsibility to maintain a pleasant atmosphere in the office when greeting and hosting both internal and external guests.”

Butcher was recognized as this year’s Outstanding Staff Award winner but admits she was shocked to even be nominated.

Standing among the other nominees at the banquet, Butcher said she was again surprised when she was announced as the winner.

“I’m feeling humbled and grateful; however there is a part of me that feels somewhat sad because by knowing who the other nominees were, I thought, they are truly outstanding and deserve this honor,” she said.

Mixed with all her other emotions is appreciation.

“It means a great deal because I am being recognized for something I enjoy doing,” she said.