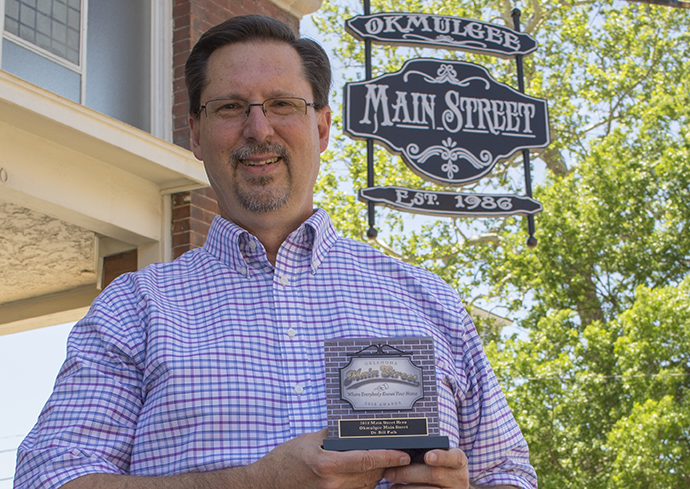 OSU Institute of Technology President Bill R. Path has worked tirelessly cultivating a partnership between the university and the Okmulgee community. Earlier this month, that work was recognized at the annual Oklahoma Main Street Awards when Path was named the 2018 Main Street Hero.

The ceremony took place May 8 in Oklahoma City, and Gov. Mary Fallin spoke to the crowd of about 400 people who attended the banquet.

Heather Sumner, director of Okmulgee Main Street, said nominating Path for award was a no brainer.

“How could we not nominate him after all he has done for our community, especially for downtown. He is definitely our hero, and we knew the judges from around the state would agree once they read the nomination essay and saw all the supporting materials we sent in,” Sumner said.

Path said the Okmulgee Main Street Board tried to keep the nomination a secret, but he eventually learned of it when the finalists were announced.

“It was a thoughtful and heartwarming gesture from my sneaky fellow board members. It was an honor just to be nominated and considered alongside the other deserving finalists from Durant, Ponca City and Tulsa,” Path said.

Last year’s Main Street Hero was fellow Okmulgee resident Richard Larabee, so Path said he didn’t expect the award to go to someone from the same community for two consecutive years.

“I was not prepared to hear my name announced as the winner,” he said, adding that he was surrounded by hundreds of people just like him who are passionate about the cities and towns they come from. “It was quite humbling to be recognized as the Oklahoma Main Street Hero in a room full of heroes. In my opinion, anyone who volunteers their time and energy to make their community a better place is a true hero.”

For Path, serving the community of Okmulgee is both a civic responsibility and a privilege.

“Garnering personal recognition for my involvement in Okmulgee has never been my objective. Rather, I have simply wanted to find ways to better connect this college town with its college students,” he said, adding that Okmulgee and the campus of OSUIT grew to have separate identities, and he’s working to change that. “It has become obvious to me that OSUIT students need a community that is willing to embrace them, and likewise, Okmulgee needs college students who are more locally engaged. I hope my involvement with Okmulgee Main Street has helped cultivate that relationship.”

Sumner said even before learning he had won, she knew deep down Path was this year’s hero and hearing his name called at the banquet was music to her ears.

“It was a much deserved award,” she said. “Our partnership with Dr. Path and OSUIT is absolutely vital to not only Okmulgee Main Street, but the entire community. Dr. Path is one of Okmulgee’s biggest cheerleaders and is a shining example of what a community leader should be. We are truly honored that he chooses to serve on our board, and we look forward to continuing our partnership with him and the university.”

The most visible example of that partnership is the new student housing complex in the heart of downtown Okmulgee. With the opening of the Grand Old Post Office Student Housing, Path said the stage is set for success.

“The impact of college students fully occupying the downtown OSUIT apartments in the fall will be increasingly felt year round and every day. Our next challenge will be in supplying for the needs and expectations of this enthusiastic group of young adults living in the very heart of our community,” he said. “I’m very encouraged by the positive developments we are seeing in Okmulgee as well as in so many communities around the state, and I’d like to thank all the local heroes who are making it happen.”