Pinning Ceremony Can Be Bittersweet for Nursing Program Graduates

Pinning Ceremony Can Be Bittersweet for Nursing Program Graduates 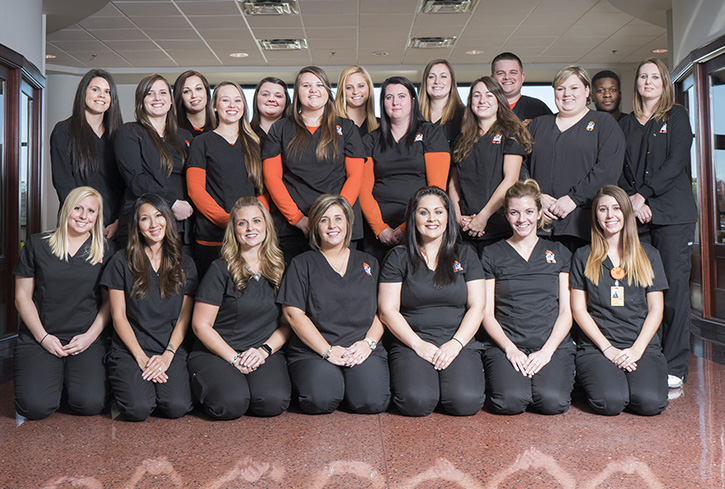 After two years of attending OSU Institute of Technology’s Nursing program, the upcoming graduates are feeling relieved and reflective that it’s coming to an end.

“It’s exciting to be done, and it’s sad to be done,” said Lexi Minter. “It’s been hard and it’s been a struggle, but I’ve learned a lot about myself.”

Minter is one of 22 nursing students that will graduate on Dec. 11 and take part in a pinning ceremony, a nursing school tradition that dates back to the 19th century.

“Graduate nurses have proudly displayed on their uniform the pin that represents their individual school of nursing,” said Jana Martin, Dean of OSUIT’s School of Nursing & Health Sciences. “The nurse’s graduation pin is a treasured symbol that conveys to others an association and everlasting bond with his or her school.”

Cassie Green, who will also graduate in December, said she learned about OSUIT’s nursing program when she was in middle school. She was already researching where she could go to school.

“I have known since I was in kindergarten that I wanted to be a nurse,” Green said. “Each semester I’ve thought I’m one step closer. It’s exciting to close this chapter.”

Every semester they’ve watched the pinning ceremonies of those ahead of them, and now it’s their turn.

“I remember hearing the speeches of those other classes and thinking, ‘What am I going to say?’” Minter said.

Both said the pinning ceremony is emotional because it symbolizes starting their new futures but also leaving their fellow classmates who have become like family.

“We struggle together. People who aren’t in nursing school don’t understand. You get really close to the people in it with you because they’re the only ones who know what you’re going through,” Minter said.

It’s just as emotional for the Nursing program faculty, even though they have been part of countless pinning ceremonies.

Martin said her favorite part of the ceremony is seeing the students being pinned by their loved ones and hearing their thanks to their families that have also endured the rigors of the Nursing program along with the students.

“It is very endearing seeing students’ children and how proud they are of their parents. Hopefully, this will instill in their children that education and hard work is very rewarding.”

Minter and Green said it will be just as hard to say goodbye to the instructors that helped them get to their pinning ceremony.

“The instructors go above and beyond to help you succeed. Their passion for nursing has rubbed off on us,” Green said.

“This is where I found my love for nursing,” she said. “You have to love it or you wouldn’t go through all the hardships to make it through.”