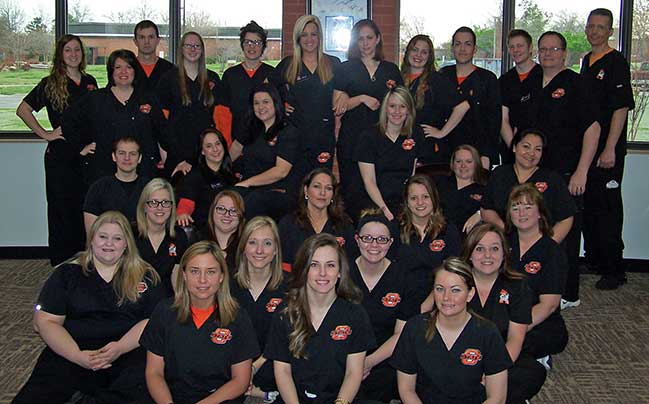 For this semester’s graduating class, watching those past pinning ceremonies was inspirational.

“It’s all you want, all you strive for. It’s very emotional,” said Kaytie Hull.

During the ceremony, when the graduate’s name is called, they walk on stage dressed in white scrubs, and are given an OSUIT Nursing Program lapel pin. While their thank you speech is read aloud, the graduates’ family pins them with their school pin.

It’s something the nursing students still in the program never forget.

“You know the hard work they’ve been through, especially now that we’ve gone through it,” said Jill Pugh, who is still coming to terms with her graduation. “It’s very surreal. I still don’t think it’s happening.”

Jana S. Martin, Nursing and Health Sciences division chair, earned her associate degree in nursing from Connors State College in 1992 and then her master’s degree in nursing education from the University of Oklahoma. She sees a reminder of her pinning ceremony every day when she comes to work.

“When I graduated we still wore nursing caps. I still have my nursing cap and it’s in the display case in the Allied Health Sciences Center and Nursing Building,” said Martin, who remembers her pinning ceremony. “It was a very emotional event for me as well as my mother and daughter who pinned me— my two biggest supporters.”

The “thank you” speeches, a favorite moment for many of the nursing students, wasn’t an easy writing assignment.

“I realized when I was writing it how much help I’ve had,” said Halie McKee. “You think you’re going at it alone, but you’re not.”

Crying was also a common element in the writing process.

“I could barely see the computer screen through the tears,” Pugh said.

Each student is allowed 200 words for their “thank you” speech, not an easy limit to stick to, especially for Hull.

Tears are nothing new to Martin, who has been a part of countless pinning ceremonies now.

“I haven’t gone to one yet that I haven’t ended up crying. I feel very proud and humbled,” she said. “Nursing school is extremely hard. Not everyone is able to make it through, but those who do have truly sacrificed personally and financially to make it through so hearing those ‘thank yous’ that are truly heartfelt is what it’s all about.”

That difficulty is stressed to the students at orientation, but many don’t really understand, said soon-to-be graduate Jessica Freed.

“No matter how many people told you how hard it was, it doesn’t touch it,” she said.

Hull said there is something that helps with all the stress and work and sacrifice.

“It’s the hardest thing I’ve ever done, but the friends we made alone made it worth it.”

Tags
Graduation - Nursing
Back to Top
©