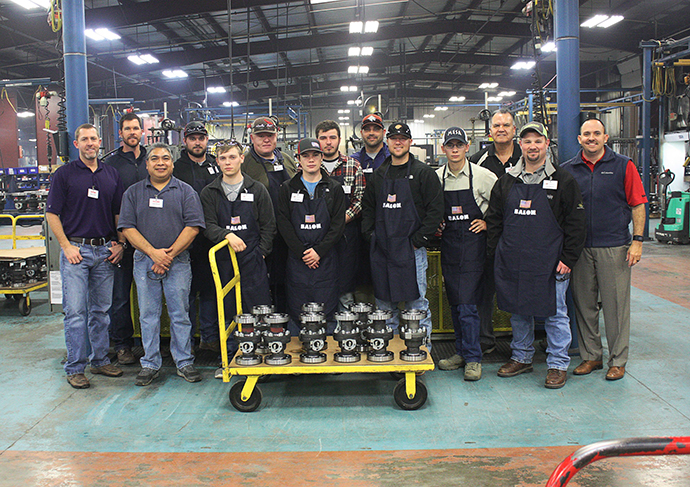 Eight students and one instructor from OSU Institute of Technology’s Pipeline Integrity Technology program recently spent a day at Balon Valves in Oklahoma City learning how valves used in the pipeline industry are manufactured, and the group even assembled valves that will be used in the field.

This was the second time Balon Valves’ manufacturing plant opened its doors to OSUIT students in the Pipeline Integrity program, said Doug Massey, an instructor in the program.

Valves do multiple things in the pipeline industry, but the most important aspect is safety, Massey said.

“If you think of pipelines as a highway system, valves would be your speed limit signs, stop signs, yield signs and traffic lights. They control the flow of the product in the line,” he said. “Valves hold back pressure whether it is pneumatic, which would be a valve on a gas pipeline, or hydraulic pressure, which is what would be used in liquid pipelines.”

Ethan Henderson and Russell Boyle, who will both graduate in April, went on the trip to Balon and said it was invaluable.

“We talk about valves a lot, it’s a big part of what we do,” Henderson said. “They’re important to the safety of you, the environment and the product in the line.”

In addition to touring the facility, each student also assembled a two-inch floating ball valve rated for 600 pounds of pressure.

“It was the most experience I’ve had with a valve,” Boyle said. “If you’re in the field, you know better how to take it apart and repair it.”

The valves the students made were put through the same safety and quality assurance tests as the other valves made at the facility including hydrostatic testing.

“They talked us through assembling them, and they hydro tested them,” Henderson said, so he feels confident in the valve he put together. “It’s out there. Someone is relying on it.”

Massey said knowing how the valve functions and operates might even save lives one day.

“The experience of actually seeing the valve built, along with building a valve on their own, is an experience that will help them throughout their careers,” he said. “Being able to get a valve to stop leaking all stems from having the basic fundamentals that they learned while going through the tour at Balon Valves.”