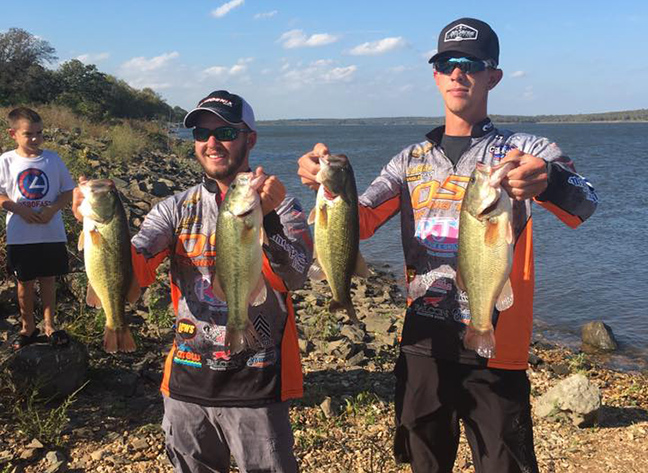 The image many have of fishing— spending a quiet, peaceful morning in a boat on a serene lake leisurely casting out and reeling in— looks nothing like the kind of fishing Power Plant Technology students Blake Capps and Logan Moody do on their weekends.

Both have a lot of experience with the sport.

“I grew up on all the lakes around here. I’m second generation; my dad was in fishing tournaments,” Capps said. “It’s something I’ve always done.”

Moody, whose father also competed in fishing tournaments, grew up on Lake Hudson. He even started a fishing club at Rogers State University.

“I started working at a fishing store in Claremore. I met some people and they took me out to tournaments,” he said.

The two recently placed fourth in the FLW YETI College Fishing Southern Regional Tournament where they competed against 93 other pairings. They were also one of three two-man OSU teams to place in the top 10.

And in September Capps and Moody took first place in the first leg of the Okie Series College Bass Tournament.

Both said fishing for recreation is a lot different from fishing competitively. The two race around a lake, sometimes traveling more than 100 miles in one day on the boat, all while trying to catch the five largest bass they can along with 50 to 100 other boats doing the exact same thing.

“A lot of people think you just go out, pick a spot and cast. This past weekend we hit 35 spots in one day,” Capps said. “You go out with a game plan, but that can change. The fish don’t stay in one place. They have fins like we have feet, they move around. You’re physically and mentally exhausted by the end of the day.”

But all that work is what makes it fun and exciting.

“You never know, your next cast could be your best record yet,” Moody said. “Once you fish competitively, it’s hard to do it any other way.”

“I’m still going to be fishing every weekend whether I’m competing or not. Adding the competitive aspect to it just lights a fire within you,” he said.

And while fishing is a passion, both Capps and Moody know earning their degree in Power Plant Technology and starting their careers is what’s most important.

“I knew some guys who worked at Grand River Dam Authority who weren’t much older than I was,” Moody said, so he checked out OSUIT’s Power Plant program. “I like working with my hands a lot and I like using my brain too.”

Capps said he knew what it was like working at a power plant because his grandfather worked at one in Muskogee. He had a friend who went through the OSUIT program so he came to campus and met and talked with instructors.

“I liked what they said and I’m glad I chose Power Plant Technology,” Capps said, but he’s not ready to give up on his other goal either. “Going pro, it’s a dream of mine, but the competition is so tough. I have to get a college degree before I even try something like that. I’m going to get a good job, work and still go to tournaments. It’s still a passion.”