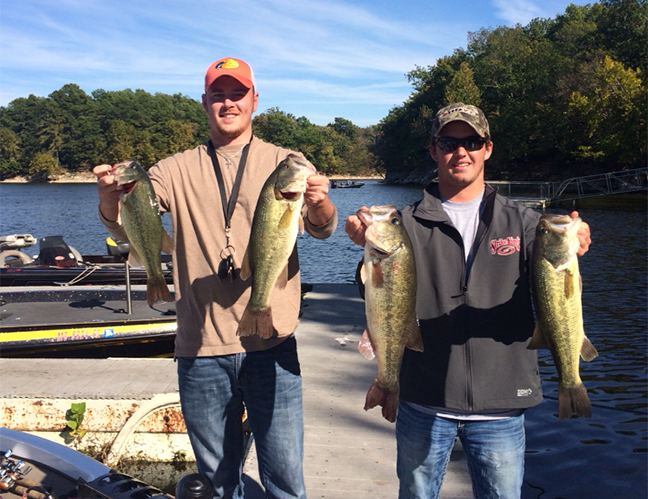 Fishing can be more than just a pastime, it can mean big bucks to those who excel at the sport. Two OSU Institute of Technology students recently took home the top prize— $800 each— at a recent collegiate competition on Grand Lake.

Blake Capps and Ryan Major, both students in the Power Plant Technologies program, won the Grand Lake leg of the 2015 Okie Challenge Series, a four-leg collegiate fishing tournament with events on the Arkansas River, Grand Lake, Keystone Lake and the championship on Lake Tenkiller.

Capps and another fishing partner took second place at the first event on the Arkansas River in September. For the Oct. 4 tournament on Grand Lake, he teamed up with his old friend and now classmate Ryan Major.

“We fish tournaments a lot, but it was the first time we competed in a college tournament,” Major said. The pair won after their four fish weighed in at 12 pounds and 11 ounces.

“I’m trying to get a club started at OSUIT,” Capps said. “It’s a bigger sport than people realize. It’s growing and getting more and more attention. There’s competitive teams in colleges and now even in high schools.”

Both Major and Capps competed in high school and advanced to the national stage with Capps even placing 7th at the World Finals competing against more than 300 schools from across the country.

He was close to earning a fishing scholarship and contemplated attending NSU to compete on their fishing teams.

“NSU wanted me to fish for them, but I liked OSUIT, and it had the degree I wanted,” Capps said.

Both said there is strategy involved when it comes to fishing.

“There’s a lot more to it than people think. It’s not just throwing bait out there and seeing what you catch,” Capps said. “Not anyone can just do it competitively. You have to learn the lake; you have to figure the fish out.”

The day before the tournament, Major said he and Capps spent the day on Grand Lake determining the best spots to fish.

“You have your electronic fish finders, but you’re also looking for places with big rocks where fish hide to hunt their prey,” he said, and then the fish become the prey.

Fishing is something Capps and Major have been doing since childhood, and it gives them a chance to be outside.

“I like the outdoors. I hunt and fish. You never know what you’re going to catch,” Major said.

For Capps, he hopes the hobby he picked up as a child can grow into a career. If not, he said he will have the training and skills needed to pursue a career in power plant technologies like his grandfather.

“My brother fishes a lot, my dad fishes a lot. I’ve done it since I was little. When I got older, I started following Bass Masters, and that’s what I would ultimately like to do,” he said. “Going out on the boat, it’s relaxing to me. Sometimes I just go out and catch some fish just to get away from everything.”