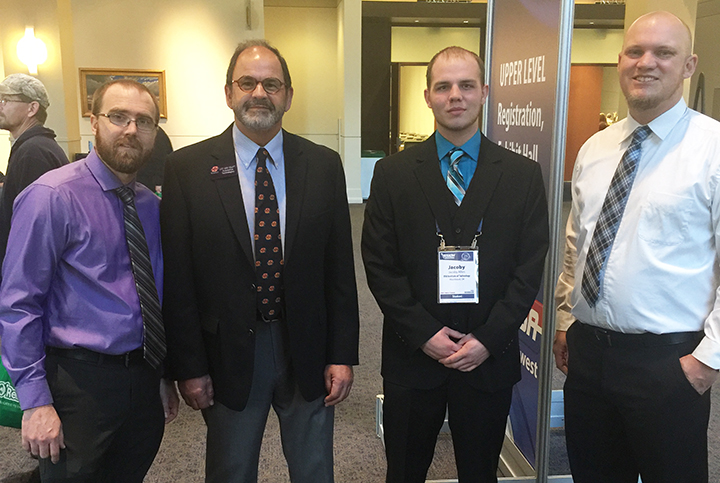 Jacoby Allen, a student in the Pro-Tech program, is the recent recipient of a Technicians of Tomorrow Scholarship from the Automotive Service Association-Midwest.

Allen, who will graduate from OSU Institute of Technology’s School of Automotive Technologies in August, was awarded the scholarship at the 2017 Vision Hi-Tech Training & Expo, a conference for national and international automotive service professionals held near Kansas City, Kansas.

“I was completely shocked,” he said of being awarded the $1,000 scholarship. “It will help out with tuition. I’m personally paying for school myself, so a $1,000 makes a difference.”

Ryan Lasarsky, instructor in the Pro-Tech program, was also at the conference and went on stage with Allen when he received the scholarship.

“It was exciting to me. It was fun to be up there with him. It made me proud,” Lasarsky said. “[ASA-Midwest Executive Director] Sheri Hamilton told me she had to look over 300 applications, and she said Jacoby’s really stood out."

For Allen, who grew up in Woodward, automobiles have been a part of his life for a long time.

“I’ve known since I was little it’s what I wanted to do,” he said. After touring OSUIT’s automotive programs, he chose to enroll in the Pro-Tech program. “It wasn’t dealer-based like some of the other programs. It wasn’t just Toyotas or Fords; it was all sorts of cars. It’s something different every day.”

And he enjoys the hands-on aspect of instruction and learning at OSUIT.

“I can read a book and learn how to do something, but when you’re actually doing something it’s better,” Allen said. “For me, it’s not necessarily easier than learning from a book, but it’s preferred.”

He even learned some things while attending the conference.

“It was good, more learning. Without continuing education, the technicians are done for. You have to be willing to learn,” he said. “I can definitely see myself going again in the future.”

This was the fifth year Lasarsky has attended the Vision conference and was joined this year by fellow Pro-Tech instructor Eric Reeves and School of Automotive Technologies Dean Leo Van Delft.

“As an educator it’s beneficial to me because I’m interacting with other automotive educators and technicians at the top of their game,” Lasarsky said, because preparing students for things like electric vehicles and automated cars is vital. “Saying vehicles are changing so quickly now, it’s an understatement.”