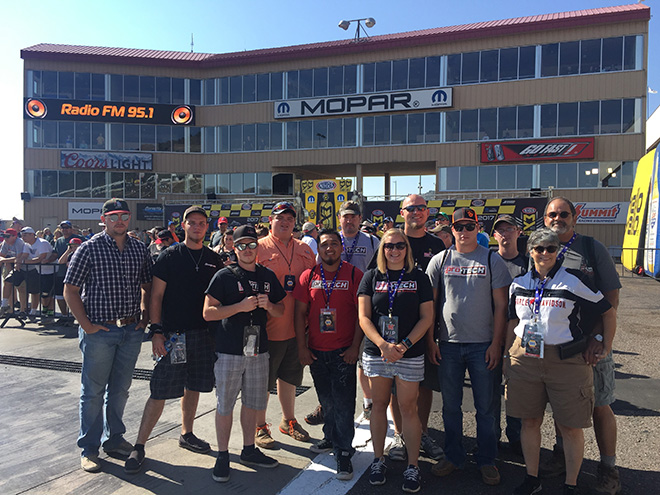 Students from OSU Institute of Technology’s Pro-Tech program in the School of Automotive Technologies got a taste of the racing life after a recent trip to Bandimere Speedway outside of Denver.

“When the first nitro car passed, that was pretty awesome,” said Pro-Tech student Josh Palmer. “They said, ‘Your whole body is going to shake.’ I said ‘OK,’ and then my eyeballs shook.”

“When you see a car drive by you at 300 miles per hour, it shakes your entire body,” he said.

In addition to attending the races, the group also got behind-the-scene access to pit crews and drivers, a highlight for several students on the trip.

“Just sitting there talking to the Snap-On team, just answering any questions we came up with,” Allen said.

For Tyler Titus, his favorite part of the trip was watching the crews work.

“Hanging out in the tents and watching them rebuild the funny cars. The organization and speed of the pit crew, it’s so meticulous,” Titus said. “They’re focused on what they’re doing. They’re not talking, but they’re working together. It’s like a weird song and dance.”

The annual trip, either to Bandimere or Heartland Park in Topeka, Kansas, is a treat for the Pro-Tech students who graduate in August. In order to be eligible, the students must be in good academic standing with no disciplinary issues on their record.

“It’s always our capstone class. The racing teams, they’re willing to let us go behind the ropes and talk with our students. They’re so pro technical education,” Lasarsky said.

While the students and pit crews all work on cars with an engine and four wheels, their careers aren’t alike at all.

“It’s got a motor and that’s about as similar as it gets,” Palmer said. “There’s so much tweaking that goes into a nitro car that we don’t have to worry about. We can take our time to make sure it’s done right.”

“They’re taking 45 minutes to do something that I can take two hours to do,” he said, which is why he would rather spend time in a shop and not part of a pit crew. “If you don’t do your job right—I wouldn’t want that resting on my shoulders. Something breaking when the car is at 300 miles per hour is different than at 55 miles per hour.”

“Some of the students went out of their way to shake the hands of the drivers and pit crews and thank them. I didn’t ask them or tell them to do that,” he said.