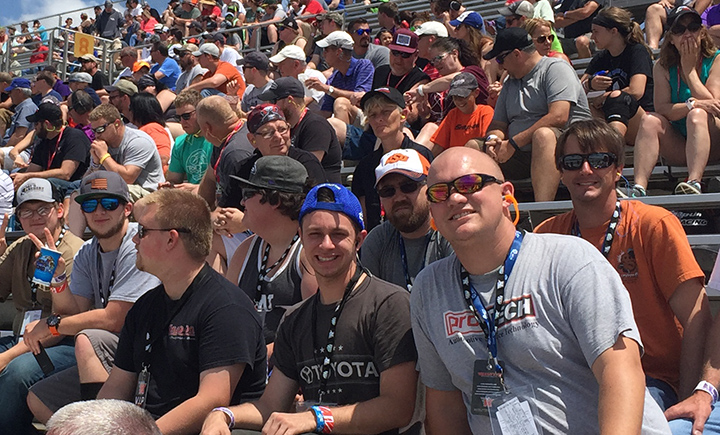 Students from OSU Institute of Technology’s Pro-Tech program got a taste of the racing life after a recent trip to Heartland Park in Topeka, Kansas.

With funny cars speeding by at 300-plus miles an hour, the first word the students used to describe the races was loud and that you can feel the cars as they race around the track.

In addition to attending the races, the group also got behind-the-scene access to pit crews and drivers.

“I actually found watching them tear down an engine and rebuild it more interesting than watching them race,” said McDade. “It took them two hours to do what it would take me to do in three days.”

The annual trip, either to Heartland Park or Bandimere Speedway near Denver, is a treat for the Pro-Tech students who graduate in August.

“It’s always our capstone class. The racing teams—they’re willing to let us go behind the ropes and talk with our students. They’re so pro technical education,” Lasarsky said, and his students each did a research paper on an element of drag racing before going on the trip.

“I saw good interaction between them and the crews, asking knowledgeable questions,” he said. “I did talk to some of the crew members and told them about the students and our program, and they’re interested.”

D.J. Wing, a Pro-Tech student, said while the skills they are learning at OSUIT are similar to those the pit crews use, there is a lot of differences as well.

Still, some students could have a career in a pit crew.

“I think it would be interesting, traveling around the U.S.,” said student Solomon Coulter.

There are six people on a pit crew, each with a specific role, each trusting the other members are doing their job to their best ability.