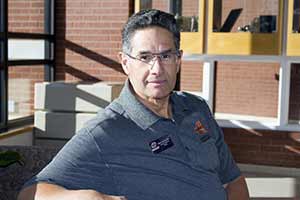 For the truly great teachers, public recognition for their work is something they tend to shy away from. They would rather focus on the accomplishments and achievement of their students, and Mark Rodriguez is no exception.

Rodriguez, a physics instructor at OSU Institute of Technology, has been named a Regents Distinguished Educator by the Oklahoma A&M Board of Regents.

Oddly enough, teaching wasn’t his first choice as a profession.

He studied science and oceanography and earned his bachelor’s from the University of Washington and master’s from New York University in those subjects.

It wasn’t until he and his wife moved to Massachusetts that he considered going into the classroom.

“I thought I would teach for a little while, do that for a few years while I waited for a job opening,” Rodriguez said, so he got a position teaching physics at Lexington High School.
“I discovered I’m a teacher.”

He taught at Lexington for nearly 20 years before moving to Tulsa where he worked for 14 years at Victory Christian High School.

Rodriguez and his wife, Neptune, an ocean engineer, moved to Oklahoma because they wanted to raise their three sons in a place more suited to their family’s values.

Their oldest, Jason, is now a graphic designer in Virginia. Joshua is a bio-engineer in Oklahoma and their youngest son, Justin, is a medical student in New York.

Nine years ago, after his children had graduated college, he decided to look for a position in higher education.

He found one at OSUIT, where he admits it’s not a typical college campus.

“I have seen just as gifted students here but they couldn’t recognize what was there. They weren’t prepared. This place can bridge the gap,” he said.

When he was attending the University of Washington, Rodriguez said he never knew his professors and was in a lecture hall with 350 other students.

“Here it’s a real hands-on school. The students are prepared to be productive. They have a chance to speak and communicate with the person who is teaching them,” he said.

Rodriguez said his passion comes from leading students to see their own potential.

“Smart, gifted students are everywhere, not just in those exclusive places at those elite schools,” he said, they just need to realize it. “Some are very humble and don’t even recognize it in themselves.”

That ability to see the gifts and talents of his students is one the reasons Rodriguez was nominated, and awarded, the Regents Distinguished Educator for 2013.

“I have spent 25 years in higher education and Mr. Rodriguez is simply one of the best faculty members I have ever had the pleasure of working with,” said Arts and Sciences Division Chair Mark Allen. “Mark is intelligent, dedicated, caring and is truly an exceptional faculty member.”

Vice President of Academic Affairs Greg Mosier said when he mentions Rodriguez’s name to a student who has taken one of his classes, he is flooded with words of praise about their teacher.

“Mark is always enthusiastic about education and his teaching, and he has said to me on more than one occasion ‘I love teaching and I love to see the spark in the students’ eyes when they just got it, when a topic they have been struggling with finally makes sense to them.’” Mosier said. “Mark’s teaching style and philosophy maximizes the applied learning methodologies that OSUIT is so well known for.”

Rodriguez said he’s not alone in this mission.

“I know faculty who are every bit, if not more, dedicated than I am. Who deserve this more than me,” he said. “We have extraordinarily dedicated people here. When you see what they do in class, it’s inspiring. They desire to bring out the best in their students.”

The recognition is nice and very humbling, he said, but the real reward is seeing his students reach, and meet, their goals.

“I said to my students ‘Your success validates my efforts.’ They are a force to be dealt with in their field. They do us proud,” Rodriguez said. “I’m most energized by seeing my students succeed and do well. This award is just icing on the cake.”