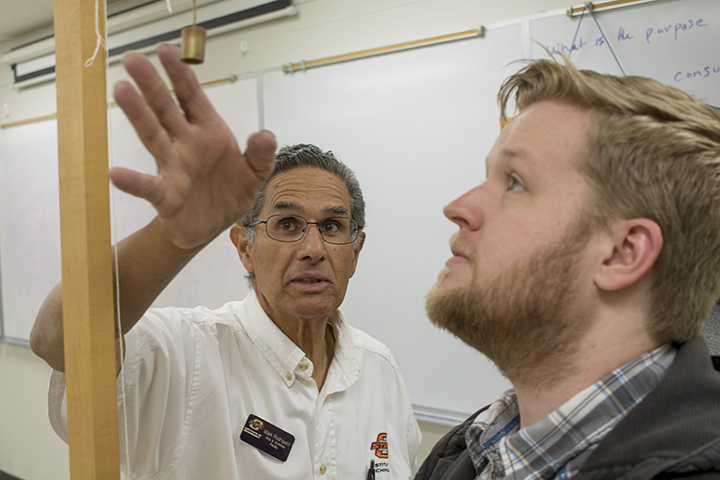 “Teachers have to adapt to their students’ learning and way of thinking,” said OSU Institute of Technology physics instructor Mark Rodriguez, which is why he uses activities many of his students are familiar with like hunting and driving to explain concepts of physics such as trajectory and centrifugal force.

Putting in that extra effort to help his students succeed is why Rodriguez was recently named a Regents Distinguished Teaching Award winner by the OSU/A&M Board of Regents.

This is the second time Rodriguez has received the honor. The first was in the 2013-14 academic year.

“It’s nice to be appreciated and recognized, but that’s not the reason I’m here,” Rodriguez said. “My motivation is I want to see the underdog win. I want to see victims become victors.”

Before moving to Oklahoma nearly 30 years ago and coming to work at OSUIT 13 years ago, Rodriguez taught physics at a high school in Lexington, Massachusetts outside of Boston and close to some of the country’s most prestigious universities.

“I’ve been blessed with opportunities to teach some gifted students back when I taught out east,” he said. “Here at OSUIT I’ve come across students just as intellectually capable, but maybe not as academically prepared.”

Once Rodriguez has those students in his classroom, he begins to see their potential in areas of study that they never thought they could excel in.

Dr. Scott Newman, vice president of Academic Affairs for OSUIT, said he wasn’t surprised at all that Rodriguez was recognized once again with the Regents Distinguished Teaching Award.

“Mr. Rodriguez is well known for going above and beyond to help students be successful, both during their tenure at OSUIT and in the future,” Newman said. “Our university is fortunate to have so many talented and dedicated faculty, and Mark Rodriguez is definitely among them.”

Rodriguez said he’s just one of countless teachers and instructors at OSUIT who work to ensure their students do well and succeed inside and outside the classroom.

But Rodriguez said he expects his students to work just as hard.

“I don’t mind making my students work hard because they will appreciate that hard work later on,” he said. “I enjoy working with people who appreciate the opportunity they’re given and the education they receive when they come to OSUIT.”

Rodriguez is just a few years away from the 50-year mark as a teacher, but he can’t really see himself stopping any time soon.