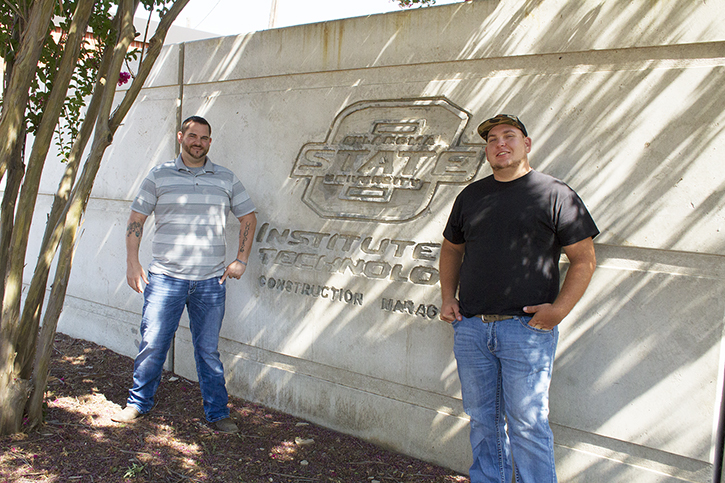 Four OSU Institute of Technology Construction Management students were recently awarded scholarships from Oklahoma’s chapter of the Associated General Contractors of America. But the recognition is about more than just the money.

“There’s a network of people there,” said Kizzia. “What better room to be in when you’re needing a job? They see you’re putting an effort into your education.”

Jobe agreed, adding that it’s not just money you’re getting when you are awarded the scholarship during the meeting.

“All those contractors in that room see that you put the time and effort into this scholarship process and that you’re willing to work on your education,” he said. “You could walk out with a job and a scholarship.”

“I needed it. I have a 3-month-old baby. It just helps with all kinds of payments,” Kizzia said.

While the four all took home a scholarship from AGC to help with their education, each has their own story of how they got to OSUIT.

Jobe said he’s been doing carpentry work since he was 14 years old and enrolled in a vocational program while in high school.

“My vo-tech instructor saw that I was kind of a leader in the class. He said ‘I think you’ll make a good supervisor one day. I think you have the skills,’” he said. “I didn’t have any idea of going to college, but he encouraged me and told me about the Construction Management program here.”

For Kizzia, OSUIT was an opportunity to advance in his career.

“I’ve been in the construction trade for the last 10 years of my life. I woke up one day and wanted a change. I wanted a better life for myself and my family and that’s what this degree will provide,” he said. “I won’t be hanging Sheetrock for eight hours a day. Now I’ll go to work, but still have energy to play with my child when I get home.”

While Motley and Kreinbihl are each on internship during the 2014 summer semester, Jobe and Kizzia are preparing to graduate Aug. 22, and both already have jobs waiting for them. Jobe will start as a field engineer at Crossland Construction’s Dallas office and Kizzia will be a project engineer at Flintco Constructive Solutions in Tulsa.

Both said if they hadn’t gone through the Construction Management program at OSUIT, it would have taken them years, if not decades, to advance to the positions they will be starting at after graduation.

“I don’t think my company would ever have even looked at me as a project manager if I hadn’t gotten this degree,” Kizzia said. “You’re not going to learn everything for your job while in college, but it teaches you how to learn and it shows your employer that you’re committed.”

Tags
Construction Management
Back to Top
©