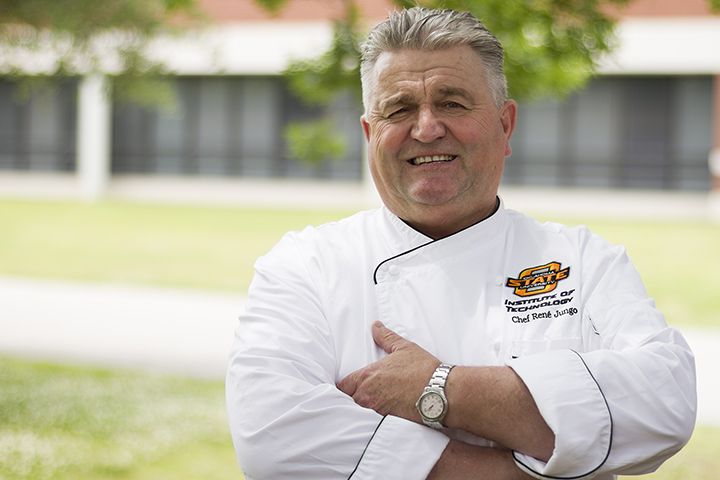 As a child growing up in Switzerland, Chef Rene Jungo saw cooking as a way to see the world, and that’s exactly what he did during the first half of his culinary career.

But for the past 30 years, he has spent his time bringing the world to OSU Institute of Technology’s School of Culinary Arts.

Before the age of 30, Jungo spent time learning and working as a chef at hotels and restaurants in Switzerland, England, Spain, Bermuda, Singapore and the United States where he worked on cruise ships that took him from Miami to the Caribbean and South America.

Marriage brought him to Tulsa in 1978 where he worked several years before he heard about an instructor opening in the culinary arts program at OSUIT.

“My friend Ludger Schultz called me in the middle of the night to tell me about this job. I hung up on him at first, but then I couldn’t sleep so I called him back,” Jungo said. “At 4 a.m., I’m updating my resume, and I mailed it the next day.”

He met with administrators including then-OSUIT president Bob Klabenes and convinced them he was right for the job. He started on Aug. 25, 1986— almost 30 years to the day of his retirement on Aug. 29.

There will be a retirement reception on Aug. 18 from 2 to 4 p.m., in the Reynolds Building Pavilion with drinks, snacks and an open mic for people who want to share stories and memories about Jungo.

After so much moving around in his early career, there were a lot of reasons to stay at OSUIT for three decades.

“The quality of life, the benefits, having weekends and holidays off was huge. And the people, that’s what I’m going to miss the most,” Jungo said.

During his time at OSUIT, he has worked as an instructor, assistant dean and finally dean.

“When I look back at 30 years, the most fun I had, the most exciting time was when I was a teacher,” he said. “People used to say I was yelling— no, it was excessive enthusiasm.”

In those 30 years, Jungo saw the culinary program evolve and grow from 25 students to 125. He also saw the renovation of the State Room and expansion of kitchen spaces, and worked with university administrators so he could attend conferences and visit other programs like the Culinary Institute of America to see what they were doing and how it could improve OSUIT’s program.

“We started to raise the bar. Advisory members got more involved. Our enrollment is busting at the seams,” he said. “I’m very proud. We’re doing things right.”

Dr. Scott Newman, vice president of academic affairs, said the lasting impact Jungo has made on students, alumni and the culinary program are incalculable.

“OSUIT’s School of Culinary Arts is among our nation’s most well-regarded. Chef Jungo has made countless contributions toward the school’s achievement of those levels of prominence,” Newman said. “There is no question he will be missed.”

Jungo is happy to see that legacy of professional development for instructors will continue, and that the program will evolve just as the industry evolves.

“It’s nice to leave when everything is going up. It wasn’t always easy, but you have to change and improve. I know we will have a presence in Tulsa soon. I have been fighting for that for years,” he said.

And Jungo still has that excessive enthusiasm he started with 30 years ago. In his retirement he plans to travel, take continuing education courses, spend time with his sailing club at Lake Oologah, continue dog-training classes and ride his motorcycle around the country.

“I’m not sad about anything. I’ve done what I came here to do, and I appreciate what the institute did for me,” he said. “The time was right for me to retire. I’m 65, and I can still ride my motorcycle, I can still sail, I can still get around. I can still do the things I want to do.”

“The first time I really got to interact with Chef Rene was when I was filming the ‘New Path’ video series, documenting my first 100 days on the job as President. As I recall, the Culinary program was one of my very first tours that we recorded. Chef Rene, with his natural warmth and larger than life personality, made me feel right at home in his kitchen, and the interview was wonderful. He put me in his own chef’s hat and coat and had me feeling like a master chef in no time. The on-camera banter and laughter between the two of us was spontaneous and real. Rene has a delightful way of making everyone feel welcome and at ease when they are in his presence.”

“As an aspiring culinarian in the early 90’s, I came to tour this program. On that tour, Rene spoke with passion about the quality of instruction and how it wasn’t necessary to spend a fortune on the ‘other’ schools.  He showed me around the facility while pointing out the experience of the faculty and that they had recently adopted the same textbooks as the bigger schools. Before I left that day, I knew this is where I would train to become a chef.  I believed my degree would mean something out in the real world. As a student, I will never forget his European accent; his bigger than life personality; and the stories of his worldly travels. We were mesmerized by his tales of working as a chef aboard cruise ships and in hotels with exotic locales. I knew then Chef Jungo was a driving force in making improvements to the program to make certain we were well-trained graduates. As a faculty member, I can look back twenty years and see his dedication never changed. He remains a well-respected, old school chef that values hands-on experience. We have come a long way and grown into a renowned School of Culinary Arts, I believe in large part due to Chef Rene Jungo’s passion and dedication.”

“I was impressed that OSUIT had international chefs. For me, Chef Jungo is the epitome of what a professional chef represents. He was always well groomed with a spotless chef coat, starched slacks, shined shoes, and a tall, tall toque. He made you aspire to be a part of such an exclusive brotherhood—a chef. Always motivating, making me believe that I could go as far as I wanted in this career.”

— Chef Jennifer Hill Booker, School of Culinary Arts alumna who went on to graduate from Le Cordon Bleu in Paris before starting her own personal chef business, writing a cookbook and becoming a culinary arts instructor herself at Le Cordon Bleu in Atlanta.

“A few years ago we were all sitting down for lunch. The topic of a new policy came up, and I remember Rene’s response. Without skipping a beat, he said, ‘They want to treat us like their porcupines.’  Chef Grady Perryman said, ‘Do you mean Guinea pigs?’ Rene said, ‘Yes, same thing, whatever.’  Rene always had certain American phrases he never quite perfected; this is just one funny example. Rene will definitely be missed on our campus and in the School of Culinary Arts. He has seen the program grow tremendously over the last thirty years. I think he has brought together a unique and talented team that will help continue to push the program to new heights in the coming years.”

“Rene is there to help you. He can get you to a place where you can figure it out. I remember my first day on campus as a student. Rene was the first chef I met on campus. He helped me by taking some of the fear out of it. Now working here and being colleagues, there have been ups and downs, but when it comes to it, Rene helped elevate me. I’m forever grateful for that and I’ll miss him.”