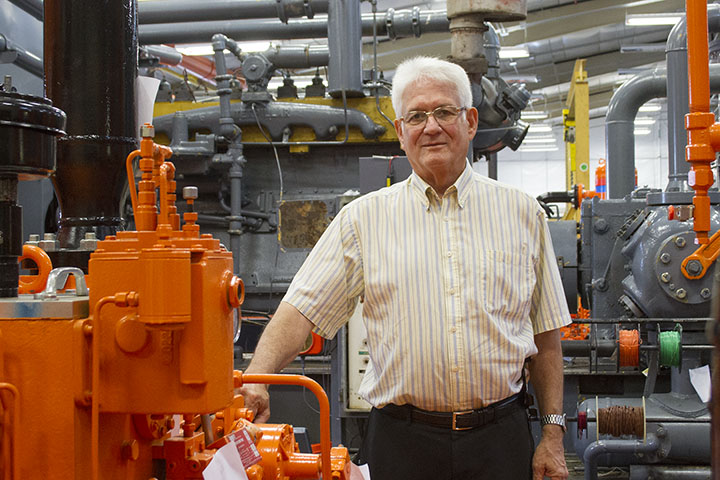 More than 25 years ago, Roy Achemire was living in Texas and discouraged after being laid off and not finding any new job prospects until his wife found something that piqued his interest.

“Judy found this little three-inch ad in the Dallas Morning News for a teaching job in Oklahoma. I had given up looking, but she told me to send in my resume,” Achemire said.

What followed was a 26-year career in higher education that has made huge impacts on the OSU Institute of Technology campus and community.

Achemire is retiring from OSUIT at the end of June. There will be a retirement reception on June 23 from 2 to 4 p.m., in the Chesapeake Energy Natural Gas Compression Training Center.

Achemire was hired in 1991 as a diesel instructor and taught for six years before moving into administration.

“I loved it. When I moved from being an instructor to being an administrator there were still moments daily where I said ‘I miss that,’” he said. “It was hard to leave. You get that instant feedback from students, and you see the light bulb go off when they get it.”

He worked as assistant department head to what is now the School of Diesel & Heavy Equipment, then interim department head and finally department head. He also saw the school develop sponsored programs like the CAT Dealer Prep and Komatsu programs.

He also understood the importance of administrators in developing programs and relationships with industry partners and advisory board members, some of whom were Achemire’s early students.

One of Achemire’s most prominent achievements was expanding the Natural Gas Compression elective courses, which had been offered at OSUIT since 1974, into a full-fledged degree program in 1999. Then in 2013, the 24,000 square foot Chesapeake Energy Natural Gas Compression Training Center was opened to accommodate the growing NGC program.

When President Bill Path met him six years ago, he was impressed by Achemire’s wealth of knowledge and experience in the petroleum industry and in vocational training

“I recognized early on that he was the type of person that made OSUIT a unique and successful institution of higher education,” Path said. “Roy has been a true role model to many at OSUIT. He has earned the respect of his peers and co-workers as a proactive leader who builds coalitions and gets things done.”

He has also been one of the university’s loudest cheerleaders, promoting programs and touting his students to companies and industry leaders.

Dr. Scott Newman, vice president of Academic Affairs, said Achemire is a servant leader who always seeks to put others ahead of himself.

“Throughout my time working with Roy, including his time as a senior academic leader, he has always worked hard to serve the institution, its students and industry partners to the best of his abilities,” Newman said. “We will definitely miss his dedication to the institution and those it serves.”

At the end of the month, Achemire will retire from OSUIT, and he and his wife are moving back to Texas to be close to family and grandchildren, but he knows he will miss the people and the community he has grown to know and love.

“There are so many amazing people I’ve gotten to work with over the years, so many experts— people at the top of their field. I’ve learned so much since I’ve been here,” he said. “This is a great place to work. So many fine people that are just a blessing to work with.”

Tags
Energy
Back to Top
©