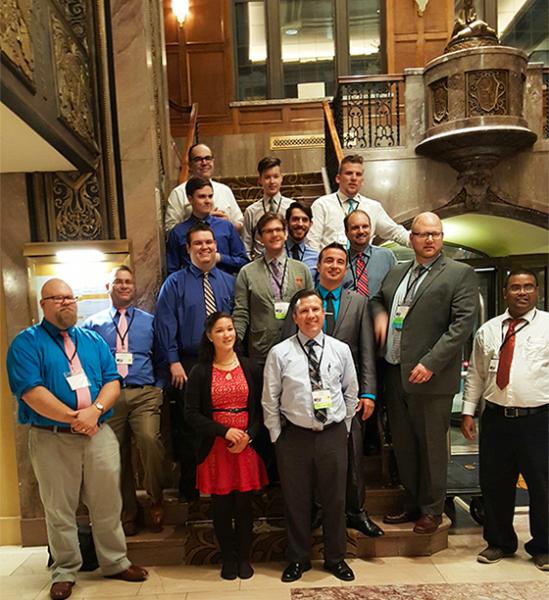 It’s a small world for watchmakers.

So when the opportunity presented itself for OSUIT’s entire School of Watchmaking to attend the American Watchmakers-Clockmakers Institute’s annual conference, the group was more than ready.

“It was good to meet other watchmakers. It’s a unique field to be in,” said second-year Watchmaking student Joe Keener.

All 13 students in the program as well as its three instructors attended the conference held in Kansas City, Mo., in early October. With the conference just four hours away, it was an opportunity too good to pass up.

Jason Champion, program chair, said attending the conference helps reinforce the lessons students are learning on campus as well as point out areas where the program could improve.

“It’s an extension of the classroom. They get to communicate with people in the industry and learn some of the newer technology and tooling,” Champion said.

The majority of the students said the networking opportunities at the conference were the best part of the trip.

“The education we received and the networking we were able to do was invaluable,” McKee said. “There are online forums and Facebook groups for watchmakers, but the conference was our first opportunity for face to face interaction. It was nice to meet other people who do what we do. You could bounce ideas off each other.”

Chase Jacobs, fellow Watchmaking student who is in his first year in the program, agrees.

Although mechanical watchmaking has stayed relatively the same for hundreds of years, there have been advancements in the field.

“There are new things out there. The manufacturing side has changed, and the materials have changed,” Champion said. “It’s a blending of old and new technology.”

Some of the changes include 3D printing of parts and new modular designs.

They also got a front row seat to different brands’ new products.

“It was interesting to see where the industry is and see the education we’re receiving compared to what’s in the field,” said first-year student Tucker Nesbitt.

Many of the students were glad to learn that the training they are getting at OSUIT is ahead of the curve when it comes to entering the watchmaking industry, especially when only 20 to 30 watchmakers graduate every year in the U.S.

“There are so many jobs available. There aren’t a lot of job fields where you can graduate and right away get a good job. And not have just one job offer, but several,” said McKee, who will graduate in December and has already accepted a job in Denver. “We’re all ready to get out there and start working.”