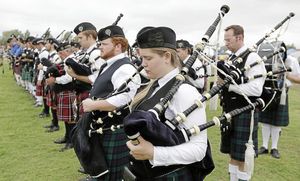 Originally published in Tulsa World | Expanded Highland Games, more fun events and raucous music will bring a bigger dose of Scotland to Tulsa this weekend with the 37th annual Scotfest.

“It’s a good feeling to be part of this growth, part of this resurgence of the culture and really making it a special event,” said Matt Thompson, athletic director of the Highland Games of Scotfest.

What visitors can expect across the board at this year’s festival are new events, new things to see and more things to experience related to the tradition and heritage of Scotland.

“We want people to feel like they can join this event whether they have Scottish heritage or not,” said festival organizer Aleah Campbell.

Tulsa's Scotfest has seen its Highland Games grow each year since they returned to the festival in 2009, Thompson said. A former shot putter in high school, Thompson said the games are a way for athletes to continue to have fun with strength competitions after their professional or amateur careers change.

Scotfest has also become a place many of the world’s top women Highland Games athletes compete as well.

Last year was the first to feature rugby, with a friendly match between Oklahoma City and Tulsa club teams. Campbell said the turnout to that event was a boon for the Tulsa rugby club.

“I thought that it went really well last year,” Campbell said. “It was the most people the Tulsa Rugby Club had watch a game in many years. I thought it was great.”

That's expanding this year to include a full rugby tournament with teams from across the region.

Food offerings are also expanding, with Oklahoma State University Institute of Technology’s culinary program highlighting some of that traditional fare like never before at Scotfest, Campbell said. And patrons can wash it all down with some traditional Scottish beer and whiskey.

Bringing the Scottish games, food, drink, dance and more to the hills of Green Country will be something that organizers see growing each year as they honor the Scottish clans who came before them, stirring pride in the clans that come after.

“If you’re out there on the field and get into it, it does stir some feelings of what it felt like to be part of that culture,” Thompson said.