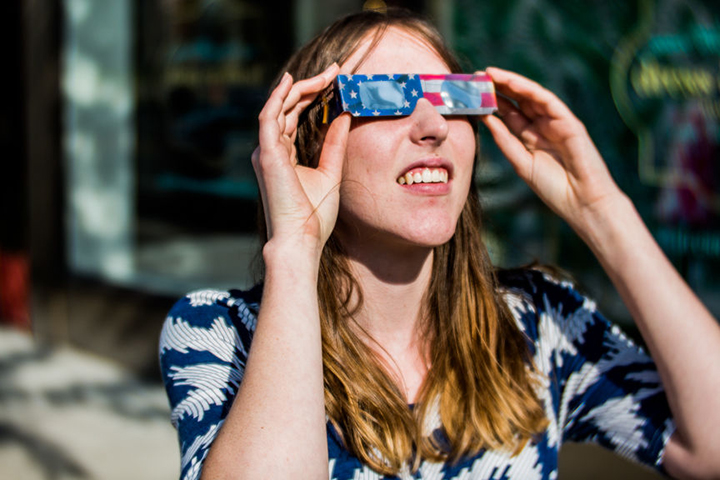 On Monday, Aug. 21, the usually bright summer afternoon will look more like dusk as a rare solar eclipse takes place across the United States.

OSU Institute of Technology’s Office of Student Life and several student clubs will commemorate the once-in-a-century celestial event with a Solar Eclipse Party from 11:30 a.m. to 1:30 p.m. on the open lawn area just north of Covelle Hall.

In addition to the glasses, Student Government Association will also be handing out Popsicles to those who come out for the Solar Eclipse Party. There will also be special solar eclipse-themed music playing with songs such Bonnie Tyler’s “Total Eclipse of the Heart” and Pink Floyd’s “Dark Side of the Moon.”

“Because it is the Monday of finals week we are hoping that it gives students a break from studying. It will be a laid back, easygoing event that anyone can come to,” Rash said. “Grab a Popsicle, jam out to a little music and just enjoy the eclipse.”

In the U.S., seeing a solar eclipse— when the moon’s orbit brings it directly between the sun and the Earth— is pretty rare.

“The last solar eclipse that anyone saw in the United States was Feb. 26, 1979, which means a lot of our students have never had the opportunity to witness such an event. This particular path of the solar eclipse, coast to coast, hasn’t happened since June 8, 1918, almost 100 years ago,” Rash said. “We felt the need to provide an experience for those who have never witnessed as eclipse of any kind. And since we are in an area that will get about 85 percent total eclipse, it gives them a pretty good glimpse of an amazing natural phenomenon without having to leave campus.”

How to view the solar eclipse safely:

• The only safe way to look directly at the eclipsed sun is through special-purpose solar filters, such as “eclipse glasses.” Homemade filters or ordinary sunglasses, even very dark ones, are not safe for looking at the sun; they transmit thousands of times too much sunlight.

• Refer to the American Astronomical Society (AAS) reputable vendors of solar filters and viewers page for a list of manufacturers and authorized dealers of eclipse glasses and handheld solar viewers.

• Always inspect your solar filter before use; if scratched or damaged, discard it. Read and follow any instructions printed on or packaged with the filter.

• Do not look at the eclipsed sun through an unfiltered camera, telescope, binoculars, or other optical device.

• Similarly, do not look at the sun through a camera, a telescope, binoculars, or any other optical device while using your eclipse glasses or hand-held solar viewer — the concentrated solar rays will damage the filter and enter your eyes, causing serious injury.

• If you normally wear eyeglasses, keep them on. Put your eclipse glasses on over them, or hold your handheld viewer in front of them.