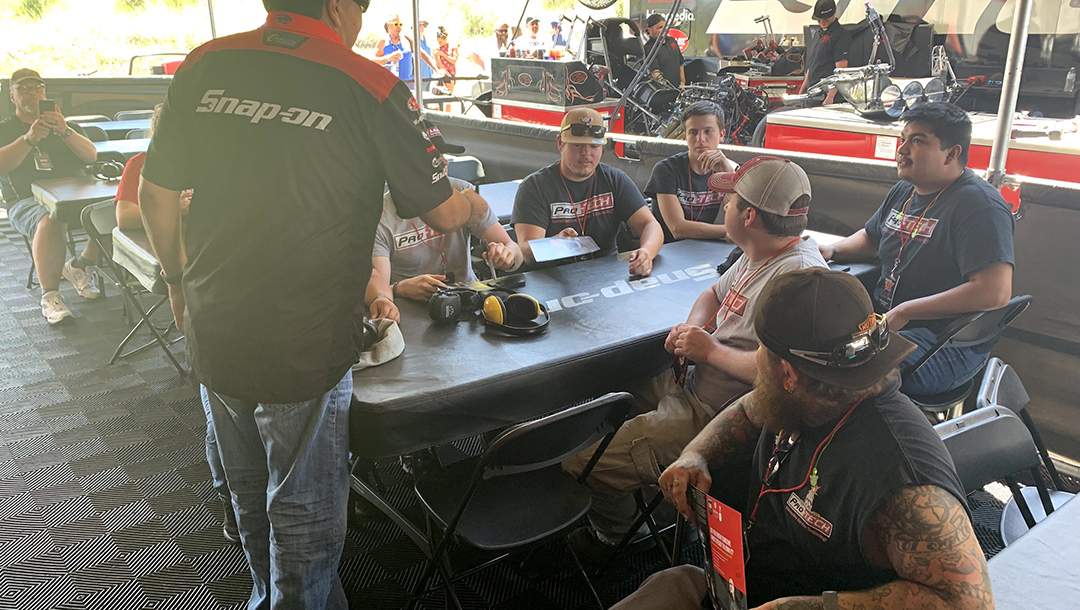 Seven, out of the eight, students enrolled in the OSU Institute of Technology Pro-Tech capstone class got to experience the trip they have been waiting for and anticipating since the first day of college, the Dodge Mile-High NHRA Nationals Presented by Pennzoil at Bandimere Speedway in Morrison, Colorado this summer.

“I have been looking forward to this, it’s a well-anticipated part of completing the program,” said Mitchell Fulton, Pro-Tech student and soon to be graduate.

This annual tradition of attending the NHRA drag races began in 2004 with the first Pro-Tech graduating class and continues to be a milestone in completing the program.

Ryan Lasarsky, Pro-Tech instructor and event chaperone, said this trip is well-earned by each student who attends. Not all students get to go.

“They have to be on pace to graduate, have no incomplete or failed classes and be free of disciplinary issues throughout their time at OSUIT,” said Lasarsky. “It gives them something to look forward to over their two years and helps with motivation when they want to skip class now and then.”

Jarod “WeeMan” Hile, Pro-Tech student, said it makes it worth keeping your head in the game.

In addition to the rewarding portion of the trip, the main purpose of attending the races is to expose students to a different side of the automotive industry, the performance side, and introduce different career possibilities in the industry.

The students had special VIP passes in the NAPA tent where they had the opportunity to sit right next to where they were rebuilding the engines after each race.

“My favorite part was getting to see people break down and rebuild an engine in 30 minutes,” said Ronaldo Huizar. “In a typical shop setting that may take two to three days to complete.”

Josh Smith, Pro-Tech student, said this experience allowed him to see what he has learned, but on a much larger scale.

“These cars are going 300 mph and break after one run,” said Smith. “Your typical passenger car, which is what we learn on, definitely doesn’t blow up after you drive it once.”

Lasarsky said the race cars incorporate every automotive area in the curriculum and reinforce what the students have been learning at an extreme level. “The students learn about engines and engine theory in the program, those same concepts are the same in drag racing except that some of those cars have 11,000 horsepower!”

He said this trip also shows the growth of the students throughout the two years. “For example, you have students who come into the program with very limited automotive and mechanical knowledge and on the trip, those same students are having intelligent conversations with each other, crew members and drivers about pretty high-level topics,” said Lasarsky. “It shows the instructors and themselves how far they have come in their understanding and abilities.”

The instructors also get a chance to network and build industry connections that in turn benefit the program. Lasarsky and Western Equipment Dealers Association instructor Terry Killman attended this year.

“We’ve had parts and components donated through connections we had made at the races which have made our program better,” said Lasarsky.

Fulton said he enjoyed the camaraderie with his classmates and instructors. “It gave us a chance to connect in ways outside of the classroom.”

Each student had their takeaways from the event, including used parts from the cars. The tradition will continue with the next graduating class.