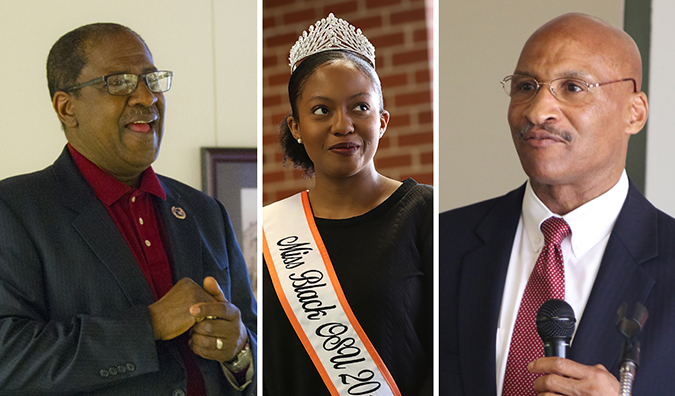 On Feb. 8, Alicia Johnson, Miss Black OSU, spoke to students, faculty and staff about her platform— Against All Odds.

“What does being black mean to me? It’s such a simple question but also so complicated,” Johnson said. “Being black means having such a sense of pride. Being black at a predominately white school, I walk around with such pride because I’m doing something my ancestors couldn’t do.”

Johnson also spoke about the response of the student body after the recent incidents of blackface on the OSU Stillwater campus.

“It was a tearful thing, but it was also a big motivation. We need to come together as students and do something,” she said, so she and other African American student leaders organized a stand-in outside OSU President Burns Hargis’ office building in January. About a dozen of the student leaders met with Hargis in his office.

The peaceful protest has led to more dialog and plans of action between the student leaders and the administrators, Johnson said.

Dr. Donnie Nero, the second guest speaker to visit the OSUIT campus, also spoke about the importance of history and what can be done to honor it and preserve it during his presentation on Feb. 14.

Nero, the former president of Connors State College, is also founder of the Oklahoma African American Educators Hall of Fame, which inducted its first 10 educators in 2011.

He started his presentation by talking about the more than 50 former segregated schools in Oklahoma named after important figures in black history, some more well known than others, such as Booker T. Washington, Abraham Lincoln, Frederick Douglass, Paul Dunbar, Phillis Wheatley and Crispus Attucks.

“When we say these names, my grandkids have no idea who some of these people are. We have to educate them,” he said. “When we think about all the accomplishments that have been made, there’s a foundation, a basis for that— the people who have gone before. It hasn’t always been easy.”

Nero is helping to honor those who have gone before by shining light on the contributions and careers of African American teachers, administrators and coaches in Oklahoma.

The OAAE Hall of Fame is located in Clearview, one of the 13 original historically black towns in Oklahoma. More than 300 people attended last year’s induction ceremony held in September at the Oklahoma History Center in Oklahoma City.

For James Finch, one of the country’s most important civil rights leaders Dr. Martin Luther King Jr., was a source of inspiration in his decision to join the FBI.

Finch is the former agent in charge of Oklahoma’s FBI field office and currently serves as the head of physical and cyber security at OG&E. He addressed students, staff and faculty on Feb. 21.

He spoke about April 4, 1968, the day King was assassinated, and how that event shaped his future.

“On that day, the world lost a great man, a moral man and a righteous visionary. At the age of 9, I didn’t understand a lot, but I sat and watched our black and white TV and realized that Dr. Martin Luther King had been shot and killed and that a lot of people were sad,” he said. “I may not have understood that sadness then, but I knew killing was wrong and that Dr. Martin Luther King was all about helping people.”

One of King’s quotes has become a mantra for Finch— “Life’s most urgent and persistent question is what are you doing for others?”

“I ask myself that everyday,” Finch said, no matter the case he was working or person he was investigating. “Civil rights under my watch were never abridged, and I think Dr. Martin Luther King would be proud of that.”

All three said being asked to take part in OSUIT’s Black History Month commemoration was an honor.

“Black History Month means I have a chance to show people what my culture is. We get that chance to talk,” Johnson said.

Black history is also a complicated and complex subject and shouldn’t be pigeonholed into one month, Nero said.

“When you look at America, you look at the influx of all cultures. Our nation is founded on these principles of freedom. When Africans came here, they were stripped of their freedoms,” he said. “Black History Month is a time in our country to celebrate and commemorate the contributions of black citizens. But black history is American history, and it should be celebrated every day.”