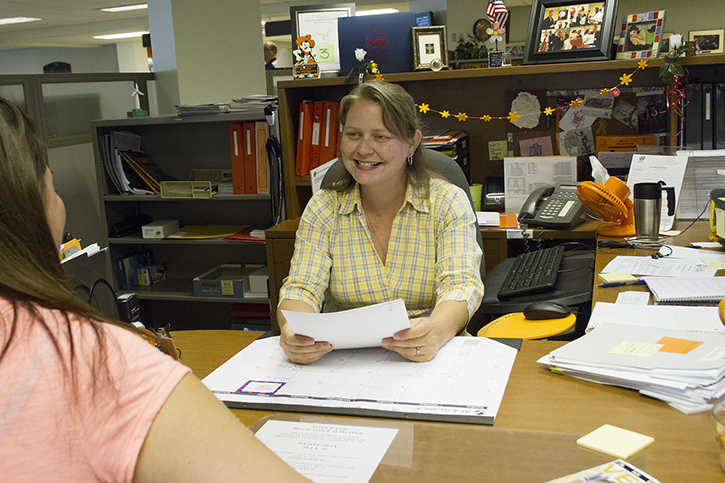 As a way to further its commitment to student veterans, two OSU Institute of Technology staff members recently became Certified Veterans’ Service Providers after attending a program in Oklahoma City.

The three-day program, “Our Call to Duty: Creating an Environment for Veterans’ Success in the 21st Century,” was offered in May by Operation College Promise with the goal of educating and empowering veterans’ service providers to support student veterans as they transition back to civilian life.

The training program had seven different sessions including panel discussions and workshops for the more than 75 veterans’ service providers who attended.

“It had a lot of information all at once. We got to hear the perspectives of some big names who came and spoke,” said Chenoa Worthington, assistant registrar.

Oklahoma Lt. Gov. Todd Lamb was one of the featured speakers.

“As a state with more than 300,000 veterans and home to several major military installations, Oklahoma has a long and proud history of commitment in the support of our state’s veteran population of every era,” Lamb said. “Now it is time for us to demonstrate our gratitude by helping them succeed in college and on to the next chapter of their lives.”

OSUIT is now one of only 12 universities and tech centers in Oklahoma to have a Certified Veterans’ Service Provider on campus and one of only four with multiple service providers on site.

“The best parts for me were the panel discussions with veterans. It makes a big difference to hear it from them,” Farrimond said. “I’m a one-person operation. To have another person certified who can take the lead or backup with our student veterans is great. We bounce ideas off each other.”

“We learned about a lot of different resources and people. Different ideas of what we can do to improve our veteran services and what other schools have done,” she said.

“That makes a difference to veterans. They like to know you have a personal connection,” Farrimond said.

Worthington said she is working to connect veterans on campus with veterans in the Okmulgee community through the VFW and other organizations.

“Veterans are very unique. They go into the military and are told what to do, when to do it,” she said, but when their service is over, transitioning back to civilian life can be difficult. “They need a little bit more attention.”