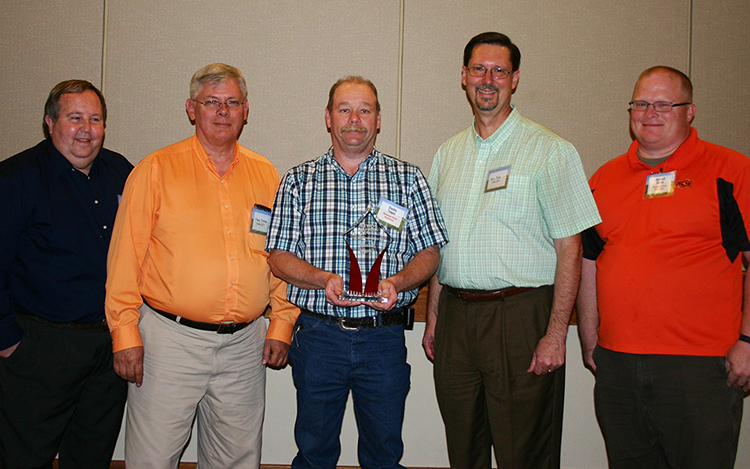 OSU Institute of Technology has received three awards since October for outstanding energy savings efforts, the latest from PSO recognizing Stanley Teague, safety and energy management director, as the Energy Manager of the Year.

He was honored at PSO’s Spring Commercial & Industrial Workshop and Energy Efficiency Awards held in Tulsa on April 26, but the recognition was kept a secret from Teague.

“I did not have a clue. It was a surprise and a shock,” said Teague, who admitted he started to have suspicions when he saw some familiar faces including OSUIT President Bill R. Path, Physical Plant Director Mark Pitcher and Vice President of Fiscal Services Jim Smith also in attendance.

“I saw my wife and I knew something was up. It was nice of Dr. Path and Mark and Jim to be there,” he said. “I consider it to be a real honor to receive the award.”

“Stanley Teague has been an active participant in PSO's Energy Efficiency and Peak Performers since 2010, he has demonstrated leadership at OSUIT by continuously finding ways to reduce energy costs and usage by identifying and implementing energy efficiency improvement projects," Rowland said. "Teague has saved 1.7 million kWh in energy, collected $185,000 in PSO rebates, and saved OSUIT over a million dollars in energy costs by participating in PSO's Energy Efficiency programs."

Prior to the Energy Manager of the Year Award, Teague and his co-workers in Physical Plant were instrumental in OSUIT being recognized as a PSO Peak Performer in 2014 and 2015. In April, OSUIT was recognized with a $1 Million Energy Reduction Award from OSU Stillwater.

Teague began working at OSUIT in 2006, and a year later he started as the campus’ safety and energy management director.

Since then Teague has worked to make the campus safer and more energy efficient. In the last few years his efforts, and those from people across the campus, have paid off— literally— with energy savings and rebates.

In recent years, technology has advanced to allow for more energy efficient lighting, water saving fixtures, and programmable thermostats throughout campus. The water line replacement project that was completed in late 2014 has also helped in cost savings.

“I’m learning each year how we can better our savings. I just dove into it with help from Physical Plant. There’s no way I could do it on my own,” he said. “I’ve seen the program come so far. We have really grown by leaps and bounds. We keep excelling each year.”

Pitcher said he’s happy his Physical Plant team, specifically Teague, are being recognized again and again for their hard work because it has made an impact on OSUIT.

“You can tell that Stan’s work and leadership in this area has really started to go beyond Physical Plant and make energy conservation more of a campus initiative and matter of pride,” he said. “Stan is quick to point out that it’s not just him or several individuals that make this program a success, it is the cooperation of everyone that makes a difference.”

Teague also gives credit to the Physical Plant staff, administrators, and faculty and staff on campus.

“The buy-in has been great. The behavioral changes that have to happen are just as important as the type of light bulbs we use or the HVAC system we install,” he said. “We’re all in this together. It’s nice to have the support from administrators like Dr. Path and Jim Smith. I can’t say enough about the support I get.”

Smith said Teague’s enthusiasm for energy savings has caught on across campus, which is a win-win for the university.

“I feel that we as a staff are obligated to be good stewards of our university and environment so we leave a better university and a good example for our students to follow by doing the right thing,” Pitcher said.

Teague is just glad his work is making a difference.

“The money we’ve saved through energy management has helped fund other projects. It may even save jobs. You actually see the outcome of your work,” he said, and it motivates him to work even harder. “We’re looking for more opportunities; more ways we can save.”