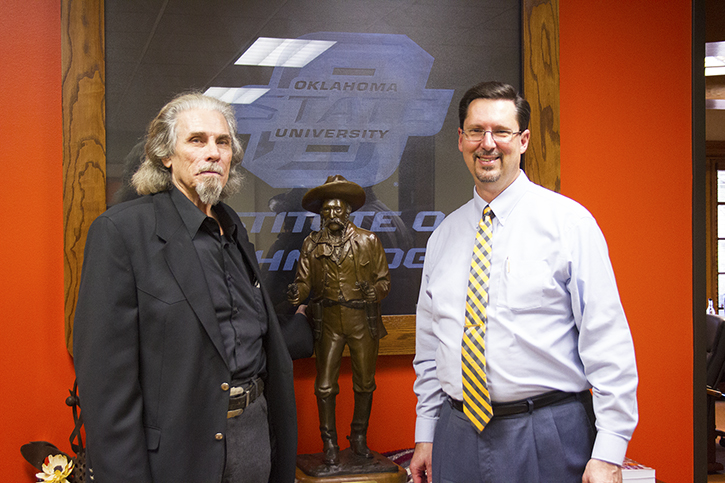 By the end of the year, the OSU Institute of Technology campus will become the newest home of a bronze statue of Frank Eaton, or as he’s more widely known, Pistol Pete, the mascot of Oklahoma State University.

The 12-foot-tall statue will stand on a 6-foot-tall stone base and be installed at the campus’ main entrance on 4th Street. A 3-foot-tall replica currently stands in the OSUIT President’s Office.

“I think it’s a beautifully sculpted likeness of Frank Eaton, who is so intricately connected to Oklahoma State University,” said OSUIT President Bill R. Path. “He will greet all visitors to campus with pistols drawn.”

The statue was sculpted by Oklahoma artist Wayne Cooper, who has shown pieces in galleries and museums all over the world. Cooper specializes in Western art on large canvases and larger-than-life sculptures.

“Anytime you do anything large, you’re making a statement,” Cooper said.

Cooper, from Depew, has worked in Chicago and New York City before returning to Oklahoma in the 1980s to be closer to family. He has paintings in permanent collections at Gilcrease Museum, Woolaroc Museum, Will Rogers Memorial Museum, the Oklahoma State Capitol, and the Oklahoma State University Museum of Art.

Path said he learned about Cooper and his statue after Vice President Jim Smith visited the Oklahoma Territorial Plaza in Perkins and saw the Pistol Pete sculpture.

OSUIT’s statue will cost about $87,000, not including the cost of the base, with the expected installation in October 2015. The OSU Foundation is raising funds for the Pistol Pete Plaza project to include landscaping and other enhancements surrounding the 4th street entrance.

“It will be impossible to miss the fact that OSUIT in Okmulgee is a true campus of OSU,” Path said. “I believe this statue will become a source of pride for the campus and a popular backdrop and symbol for the university.”

Cooper said he was thrilled when he learned OSUIT wanted to showcase his Pistol Pete statue at the entrance to the campus.

“How many people graduate from there every year, how many people visit OSUIT? My statue will now be part of the campus, that’s very important to my career,” he said. “After we’re all gone, that statue will still be there.”