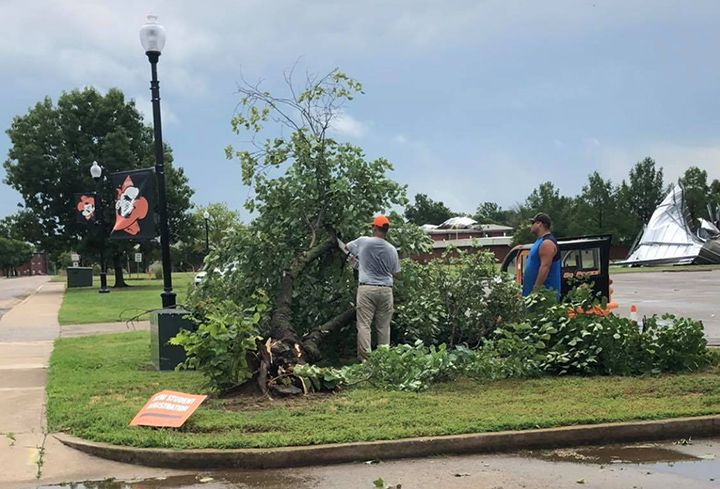 OSU Institute of Technology is still recovering following a severe storm in the early morning of June 24 that brought straight-line winds of up to 90 mph ripping through campus, damaging trees and several structures.

The roof of the OSUIT Police Department and the Office of Residential Life, which share a building, was completely pulled from the structure and landed about 200 feet away in an open lawn area.

OSUIT Police Chief Matt Wooliver said when the first calls and pictures started coming in to him of the damage, it was still dark outside

“The sun was just coming up as I got to campus, and I was shocked at the level of damage confined to the OSUIT campus,” Wooliver said. “It was incredible to be able to see the sky from my office due to the missing roof and to witness the awesome power of mother nature.”

Not long after, cleanup began, and it was all hands on deck.

“I want to take a moment to say that I’m truly grateful to all of our officers that came to campus that day and helped to start the cleanup process. It was a long, wet Sunday, but everyone pulled together and helped each other in any way that we could,” he said.

The Student Union’s metal roof sustained some damage, some shingles were blown off at Miller-Kamm residence hall, and at Covelle Hall, a section of roof was pulled up and some aluminum sheeting came down under the northside canopy.

In addition to structural damage, about 20 trees on campus had to be removed including several large mature trees that were uprooted by the storm.

“Ninety percent of the trees on campus were damaged in some way by the high-speed winds,” said grounds maintenance supervisor Allen York. “Even the ice storm in 2011, this is more tree damage than we had then.”

The grounds crew with help from other Physical Plant staff worked for six days straight to clear the limbs and tree debris strewn across campus.

“We had 33 dump truck loads of debris,” York said. “We’re still cleaning up. Ricketts Tree Service is here clearing the higher branches still in trees that are a danger.”

With the police station and Residential Life building unusable, operations have moved to the Workforce Oklahoma building.

“We were very fortunate to have the space available in the Workforce building to house us which allowed for an easy transition of some office needs,” said Residential Life Director Bo Hudson. “So far we are getting things together enough to get things back to a semi-normal workspace but will continue to work out things as they come along. Mostly, this is causing us to juggle what needs to be done with where things are. Finding what things need to be replaced as we come across them.”

Because of the damage to the Residential Life portion of the building, the resident kitchen and laundry facilities are not available to students.

Even with the building damaged and with no power, the police department still has a job to do, Wooliver said.

“Campus police is the only 24/7/365 operation on campus, so regardless of our building and work spaces being damaged to the point we cannot use them, we still have a mission and a duty to serve the OSUIT community,” he said.

Wooliver said the department’s communications tower and servers weren’t damaged as well as most of the police’s records and reports that were stored in filing cabinets. While some computers and monitors did sustain water damage, most of the department’s technical equipment is web-based and can be utilized anywhere that has an internet connection.

“While this incident has not impacted our ability to serve, or the level of service campus police provides to the OSUIT community, there may be delays in certain functions for the next few weeks as we work to get back to normal,” he said.

Tags
ResLife
Back to Top
©