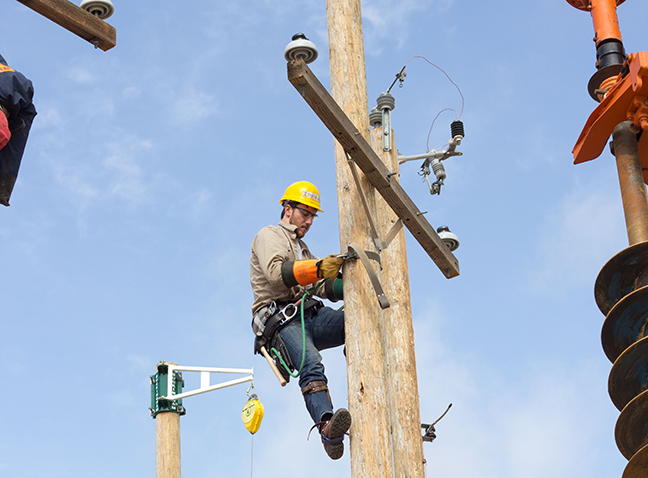 When a major thunderstorm with winds up to 70 mph ripped through northeast Oklahoma last week, it left in its wake a lot of tree damage and nearly 100,000 customers without electricity.

And when the lights go out, that’s when high voltage linemen get to work.

Students and instructors in OSU Institute of Technology’s High Voltage Lineman program who have worked during storm recovery and major outages say the experience is exciting and exhausting, dangerous and fulfilling.

“You’re called out at 2 a.m., and stay out until 2 or 3 p.m. the next day,” said Dylan Myers, a fifth semester student in the High Voltage Lineman program.

Dell Dunham worked 31 years as a journeyman lineman and then foreman before becoming an instructor at OSUIT six years ago.

Last week’s storm knocked out power to tens of thousands of people.

“It was big. They had a call in for thousands of linemen,” he said. “Major outages like that, it takes a massive coordination.”

And where widespread outages occur— urban, suburban or rural areas— determines how long it takes line crews to restore power.

“Urban areas are tougher,” Dunham said, like last week’s outage that affected mostly urban and suburban areas. “There’s tons of easements, and traffic and dogs. There are times you just can’t get to the problem.”

And the reception line crews receive when they arrive to restore power can vary.

“It depends on how long they’ve been without power,” Myers said. “We had people whose power was out for two days. Eighty percent were glad to see us— ‘We’re so happy to see you.’ ‘Thank you.’ The other 20 percent were cussing us out.”

Payton Davenport, another fifth semester student, said during his internship in December he was called down to work in north Texas for two and a half weeks after an ice storm.

“You miss a lot of events. I missed two graduations, a college and a high school ceremony,” Dunham said. “It just becomes a part of your life.”

And it can be dangerous work. In June, an AEP-PSO contractor died after being electrocuted while working on a power line in Tulsa.

“People talk about firemen and police. I put us in that category,” Dunham said. “On line crews, we try to watch out for each other. Servicemen, a lot of times they’re on their own.”

Servicemen, or troubleshooters, are sent out to locate and identify the root problem when there are outages. Ed Allphin, a High Voltage Lineman instructor who worked for 38 years in the industry, was a serviceman before coming to OSUIT seven years ago.

“I’m glad I’m not up in the middle of the night,” Allphin said. “You can spend hours looking for a problem.”

So with all the hazards involved in being a high voltage lineman, why do it?

“The pay is really good,” said Cesar Gomez, a fifth semester student. “You travel. You can work anywhere you want. There’s job security; everyone needs electricity.”