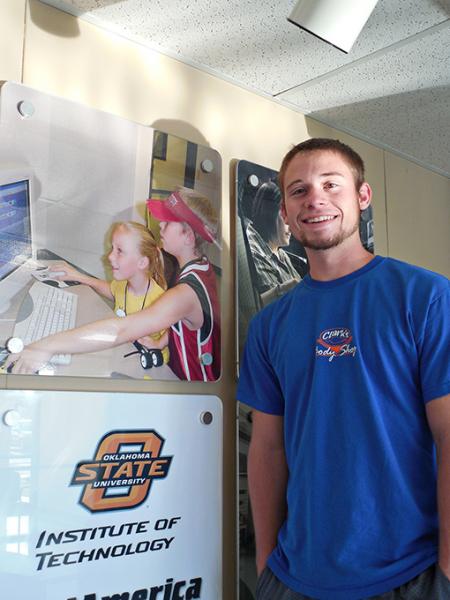 Treyce Epps was in elementary school when he first walked through the doors of OSU Institute of Technology’s MidAmerica Industrial Park Advanced Training Center to attend the facility’s LEGO Robotics Camp.

A decade later when he came back to OSUIT-MAIP, there was a familiar face to greet him on the lobby wall.

“When I arrived at OSUIT-MAIP to apply, I walked in those same doors remembering back to my elementary school days and there was a picture on the wall of me when I attended the LEGO camp,” Epps said. “It was pretty cool to see my picture on the wall at a university, I think that helped make my decision 100 percent. It’s kind of like a God thing, like I was meant to be there.”

Epps, who graduated from Pryor High School in 2012, is now studying Electrical and Electronics Technology at OSUIT-MAIP and will graduate in December.

“The instructors and administrators treat you, not only as a student, but as an adult as well. They understand that most students attending class have also worked all day long, so they are understanding and are there to help you at any time,” Epps said. “OSUIT has created a path for me to follow and now it’s my job to go out and follow it, expanding my knowledge day by day in the real world.”

Epps is getting that real-world experience while working as an intern at Google’s data center in the industrial park.

“I was told back in March that Google had approached OSUIT and was looking for three candidates to interview for an internship position. I’m pretty blessed that I was even one of the three who were chosen for an interview,” he said. “Working at Google has been incredible. There are so many other things besides electrical work that I’m learning and getting to be a part of. You get a little taste of everything from electrical to mechanical. I know I’m one lucky guy to have landed an internship out here.”

Brian Nagle, the facilities manager at Google’s MidAmerica site, said Epps has done very well during his short time as an intern and thinks he would be excellent candidate to join the company full time once he graduates.

Epps is just the latest OSUIT-MAIP student to benefit from the partnership between the school and Google. While it’s still in its early stages, the partnership has already reaped dividends, Nagle said.

“We have a number of OSUIT alumni on our technician staff. We recognized the high quality individuals OSUIT is producing and wanted to tap that resource in a formal fashion,” Nagle said. “We specifically targeted the MAIP campus to couple their strong technical reputation with Google’s commitment to drawing from the pipeline of local talent.”

Companies, Google included, often have difficulty finding qualified workers to fill their ranks, he said. Workforce development and technical training programs are critical to the health of area industry.

“At Google, we pride ourselves on operating the most efficient fleet of data centers in the world. Our data center technicians have a large influence on the efficiency piece of the operation,” Nagle said. “As a result, we have a keen focus on hiring a highly skilled workforce with strong technical backgrounds. Technical training from schools like OSUIT is a large part of forming that foundation required to be successful in our industry.”

For Epps and other students at OSUIT-MAIP, that technical foundation started even earlier, when they built a robot out of LEGOs.

“I could say that it’s ironic that Treyce began his journey here with a LEGO experience, but we are finding that it’s actually more common than we originally thought,” said Scott Fry, director of the OSUIT Advanced Training Center at MidAmerica. “We have had several students come through over the last few years that participated in one of our LEGO programs as a youth.”

The training center has hosted LEGO camps for 12 years as a way to create awareness and excitement for technical education and careers, and now that investment is paying off.

“It’s important that area citizens, including parents and their children, are aware of the opportunities that exist to get educated and employed right here in their own community, and the LEGO program is one way we can accomplish that at a young age and get that seed planted early,” Fry said. “It’s imperative we continue to offer and support programs like LEGO camps that advocate technical careers so we can get more young people in the pipeline and provide the skilled workforce our employers so desperately need.”

Epps said he is grateful that he had the opportunity to attend the LEGO camp all those years ago.

“I had a lot of fun building robots and then programming them to complete tasks. I wouldn’t mind at age 21 to attend another camp like that,” he said.

Epps said when he finished LEGO camp, at the time he wasn’t even thinking about what he wanted to do when he grew up, and it was just another fun summer camp experience, but maybe it did spark an interest and that’s why he’s so happy working at Google.

“I look forward to coming to work everyday. You never know what job you’ll be put on next,” he said. “To me, that’s exciting.”