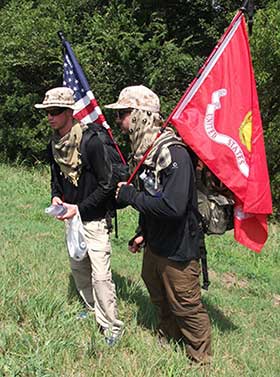 Five students with the Student Veterans Association recently coordinated a water drop off to two Marines walking across the country as part Wounded Walk, a campaign to raise awareness and money for wounded war veterans.

“We wanted to support these veterans who were walking across the country,” said Crystal Bowles, SVA adviser and OSUIT registrar. “We wanted them to know we were following their progress and rooting them on from the sidelines.”

The veterans, Adam Shatarsky and Chris Senopole, are walking across American in association with the Wounded Warrior Project, which works to help injured service members aid and assist each other.

The Student Veterans Association has been following the progress of the two Marines since their walk began in Fort Pendleton, Cali., in June. After tracking the walkers across Oklahoma, the SVA sponsored a student trip to visit, take water and show support to the Marines as they walked through Henryetta, Okla. on I-40.

“They were really happy to see us and stop and talk with us for a while,” Bowles said. “Several of the students that went on the trip were veterans or are close to veterans, so we wanted to support their efforts to raise awareness for the wounded veterans in this country.” 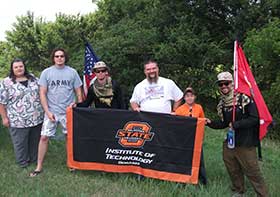 The Marines have a target date of reaching Washington D.C. by October 1.