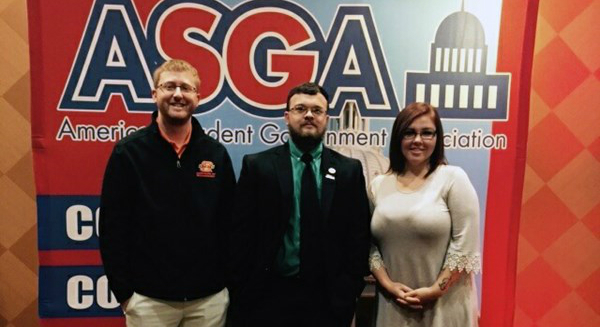 The two attended workshops as well as networked with other SGA senators from across the country.

“They had a bunch of seminars: one on different fundraising events; one on culture competency and how to handle things within SGA; one about stress relief,” Kovac said.

Fout said that between the sessions, attendees could intermingle and talk with people from different colleges and even high schools.

“It’s a good networking opportunity and a good organizational opportunity,” he said. “I hope it becomes an annual trip.”

“You get a lot out of the conference and the workshops, and you bring it back to your campus,” said Goodno.

When he took over as SGA advisor, membership had dropped to zero, but now there are 11 student senators from seven different programs with the goal of growing the organization more.

Both Fout and Kovac joined SGA because they wanted to make OSUIT better for students.

“What a lot of students don’t understand is that they have a voice,” Fout said, and the SGA represents the study body to the administration and faculty. “We’re their voice, the advocates for the students.”

Goodno said SGA is an opportunity for students who feel their concerns or their ideas aren’t being heard.

Kovac, who will graduate in December, wishes she had joined sooner.

“I had no idea what SGA was. I found out through an email; I didn’t know it even existed. So now we’re working on getting our name out there,” she said

The group will soon launch a new logo that will adorn items like T-shirts or koozies as well any posters and fliers for club activities. But the need for more student senators is always there.

“Even if students are part of another organization or club, they can be part of SGA so they’re group is represented in student government,” Fout said. “We can help each other.”

Those interested in joining SGA or for more information can contact Dustin Goodno at dgoodno@okstate.edu and by calling 918-293-4945.

Tags
Student Government
Back to Top
©