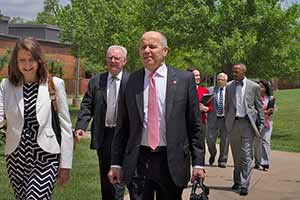 Andreas Maager, Consul General of Switzerland in Atlanta, visited OSU Institute of Technology Friday as a part of a special trip to Oklahoma to further strengthen ties between Switzerland and Oklahoma.

Switzerland’s Honorary Consul in Oklahoma Rico Buchli and his wife Beatrice, who have close ties to OSUIT, accompanied Consul General Maager on a tour of campus, which highlighted the Schools of Culinary Arts and Watchmaking programs.

At a luncheon prepared by students of OSUIT’s School of Culinary Arts, Consul General Maager led a dialogue entitled “This Swiss: Doing Business with Switzerland” with OSUIT administrators as well as distinguished business partners and community members.

Guests at the luncheon and dialogue included the Mayor of Okmulgee, representatives from the U.S. Department of Commerce and the Oklahoma District Export Council, the Chair of the Governor’s International Team, and the President of the Swiss Club of Oklahoma.

Maager said he wasn’t sure what to expect before he visited the campus in Okmulgee.

“What does this mean institute of technology? I wasn’t aware it represented a type of university we have in Switzerland,” he said.

During his presentation, Maager said 60 percent of young people in Switzerland opt for vocational training at a university, and while training for their career they complete apprenticeships with companies, much like OSUIT students are required to complete internships before graduation.

“Companies rely on apprenticeships. For the companies, it’s an investment. Apprenticeships are very important. I can’t think of Switzerland without this,” he said, and the number of applied technology schools in Switzerland has increased.
“They are growing because there’s a growing need.” 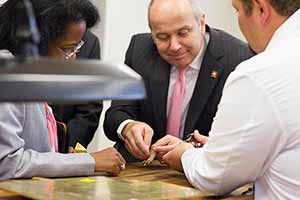 OSUIT President Dr. Bill R. Path said he was honored by the visit and was pleased to learn the mission of OSUIT and the emphasis of Swiss higher education are so alike.

“It’s been a rare privilege to have a Consul General on campus. Consul Maager raised the Swiss flag and raised our awareness of his country and culture,” Path said.

Maager said he wishes more universities would take note of what OSUIT is doing.

“It would be a model for the country. There are so many requests for people with skills and this university can meet that need,” he said. “That’s what industry wants and needs.”