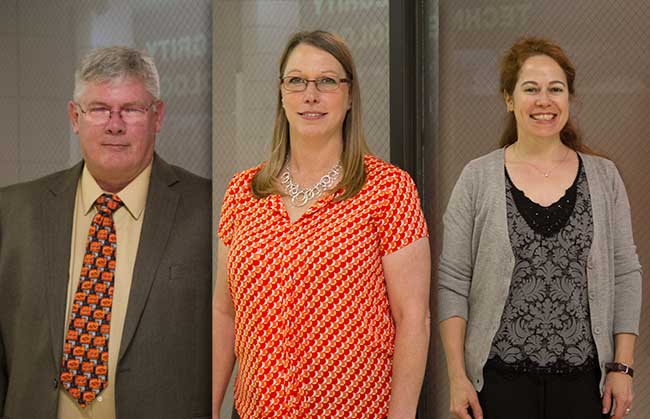 This year’s honorees for the John & Suanne Roueche Excellence Awards from OSU Institute of Technology all feel the recognition isn’t really about them, but more about those teams who support them.

Orthotics & Prosthetics Director Jennifer Block was recognized in the faculty category; Haley Holmes in the staff category; and Mark Pitcher in the administrator category.

The John & Suanne Roueche Excellence Awards recognize faculty, staff and administrators from two-year colleges and universities across the country.

“This isn’t my award, this is my department’s award,” Pitcher said. “I just get things started. I turn the physical plant staff loose and they make it happen. They make me look good.”

“I think very little of it has to do with individual accomplishments. I have such phenomenal people in my department that make it successful,” she said. “It’s a reflection of how OSUIT makes superior achievement possible, that’s what the award means.”

Pitcher and Holmes have been at OSUIT for about three and a half years and hit the ground running when they joined the campus community.

“It’s been very, very busy. You go from project to project to project. One of my first projects was working on the campus master plan,” Pitcher said, as well as a two-phase, $2 million water and sewer line replacement project.

For Holmes, it was overseeing aspects of the four-month renovation and improvement project of the Student Union cafeteria while also managing to keep food services open to students and staff.

“It’s nice to see something that needs some updating, take part in the project and then see the end result,” she said.

Block has been part of OSUIT’s Orthotics & Prosthetics program for almost eight years.

In 2013, the program was awarded a federal grant for almost $1.67 million to focus on recruitment and retention and provide a way to give credit to students for prior learning experiences and military vocations.

“The grant has given us financial resources to be able to develop new curriculum and allowed us to reach more people who can benefit from our institution,” she said.

Even with these accomplishments, the three said they were surprised they were even nominated for the Roueche award.

“I seem to be plugging along, I didn’t feel like I had done anything exceptional,” Block said, and started to feel nervous when it came time for her interview with the selection committee. “I had built up a bunch of anxiety, but when I got there it was much more encouraging than I thought it would be.”

All three are humble about their award, but also appreciative.

“It’s a nice honor. We’re not usually looking for recognition,” Holmes said, but it’s nice their hard work is being noticed.

“It’s not often that someone from physical plant wins a national award. It felt really good,” Pitcher said.