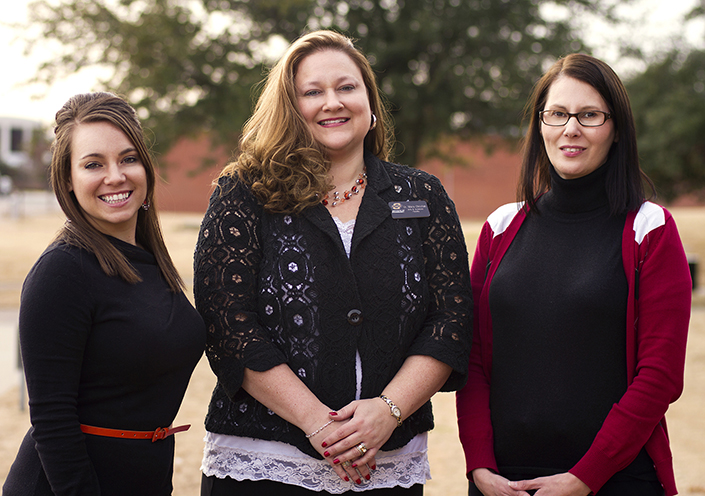 For the second consecutive year, OSUIT is the only university in Oklahoma to have John and Suanne Roueche Excellence Award recipients. This year three employees were recognized for the honor.

“This isn’t just recognition from the university or the even the state. This is a national award,” said Sable Wise, special events coordinator in prospective student services who was recognized in the staff category.

Dr. Maria Christian, an instructor in the Arts & Sciences Division, was the recipient in the faculty category and Diana Sanders, director of financial aid and scholarships, took the top honor in the administration category.

The award recognizes faculty and staff from two-year colleges and universities across the country. OSUIT’s three honorees were the only recipients from Oklahoma.

Christian said she was extremely humbled and surprised to be nominated.

“I consider myself a pretty passive person, but the person who nominated me stated that I have a strong leadership skills. She used words I would never use to describe myself,” she said.

Sanders said she was just as surprised to be singled out for recognition.

“Things I thought were business as usual, someone else saw as an accomplishment,” she said.

The other nominees in the instructor category were Gayan Herath in the Engineering Technologies Division and fellow Arts & Sciences instructor Bob Avakian.

In the staff category, Wise was nominated along with Linda Crook in the Diesel & Heavy Equipment Technologies Division and Ron Miller in the Center for the Advancement of Teaching and Learning.

Sanders was nominated along with Dr. Scott Newman, executive director chair of academic relations, in the administration category.

All three recipients said working with students and helping them get the education they want is the most rewarding part of their job.

“Working in prospective student services, I’m on the frontlines. I get to see some of the initial student responses, when they’ve found a school that’s for them when they thought they never go to college,” Wise said.

As an instructor, Christian said she then experiences those students’ breakthroughs in the classroom.

“You see them figure it out. You see those light bulb moments,” she said. “Then you get to see them walk across the graduation stage and it makes all the work worth it.”

In fact, receiving the recognition makes the winners motivated to do more and improve.

“I want to be more deliberate, I want to do more in my role that’s deserving of this honor,” Sanders said.

Christian said she wants to live up to the award and what it means.

“I want to be a good representation of OSUIT. I want to deserve the award,” she said, especially because of the other nominees. “The people who were nominated have done amazing things. It’s very nice to be in good company.”

Wise said she hopes the award motivates others who work at OSUIT.

“If you work hard, you will be recognized,” she said. “It’s nice to be appreciated for everything you do every day.”

All John and Suanne Roueche Excellence Award winners will be recognized in March 2015 at this year’s Innovations Conference in Boston.