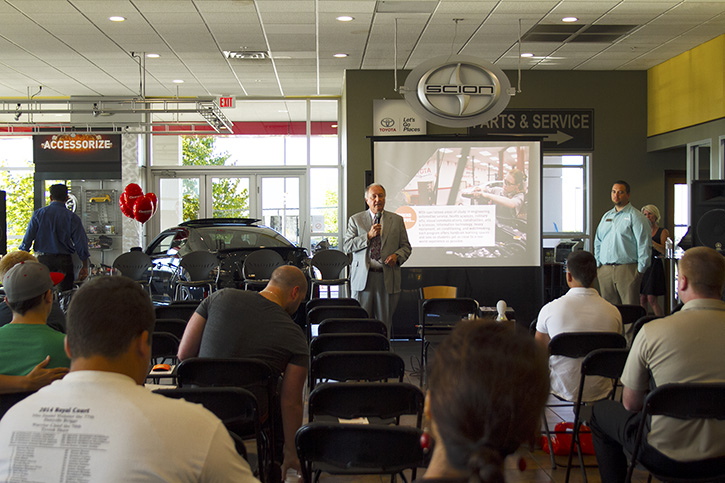 One after another, graduates from OSU Institute of Technology’s Toyota Training and Education Network, or T-TEN, program spoke about the training and education they received while at OSUIT and how it propelled them to their current career.

The graduates all work for Jim Norton Toyota’s service center in Tulsa. The dealership hosted an open house Tuesday, Aug. 11, for prospective students interested in a career as a service technician.

About 20 people attended the open house to learn more about OSUIT’s T-TEN program and what a career as a service technician looks like.

Owner Jim Norton said his dealership has had a great relationship with the university for years, and his service department is filled with OSUIT graduates.

“We have a great service department and that has a lot to do with the technicians coming from OSUIT,” Norton said. “They come out of school more settled, and they want to work.”

Greg Foster, service manager at Jim Norton Toyota, is one of those graduates.

“It’s a huge benefit to have a partnership with OSUIT. The graduates of the T-TEN program are already accustomed to how we do things. You get someone right out of high school, and you train them in your ways on your equipment,” Foster said.

School of Automotive Technologies Interim Dean Stevon Gregory said he has a passion for cars and working on them and those who have that kind of passion will find a home at OSUIT.

“I’m the kind of guy who on Thanksgiving, can’t wait to get back out to the garage to work on my car, that’s how much I love what I do,” Gregory said. “As you’ve heard from every one this evening, the T-TEN program is a great way to get you ready for a career doing something that you love.”

Jim Norton Toyota sponsors students in the T-TEN program where they complete their internships at the dealership’s service center. The dealership then hires the students once they graduate.

That’s the path Foster took 18 years ago when he started his career, and he has since worked his way from technician to service manager.

“When I started 18 years ago, we had eight technicians. Now we have 18 technicians and 20 express lube technicians,” Foster said. “There’s a constant need for technicians and they’re getting harder to find. Not everyone sees this as a career opportunity.”

Norton and Foster attribute that to misconceptions about what technicians really do.

“It’s gone from being a guy with a strong back covered in grease with a socket wench to someone whose primary tool is a computer,” Foster said.

Norton said the career path of a technician is so different than it was 20 years ago and the industry has so many opportunities now.

“We don’t have mechanics anymore, we have technicians,” he said. “You have to be smart and you have to analyze the problems in front of you.”

It’s those qualities that appealed to Nancy Rubio, who attends Tulsa Technology Center’s Career Academy and chose to go into the automotive program because it seemed the most interesting.

“I really liked it. Now I want to make it a career,” Rubio said, so she decided to attend the open house.  “It’s impressive to me to have something that doesn’t work and then you make it work.”

“Ever since I was little I was into cars,” said Hernandez, who attended the open house.

“It’s a big learning process. My dad, my uncle, they’re always teaching me new tricks,” he said, so the prospect of attending OSUIT and then making a career out of fixing vehicles is very appealing. “I want to teach them.”

Tags
Toyota T-TEN
Back to Top
©