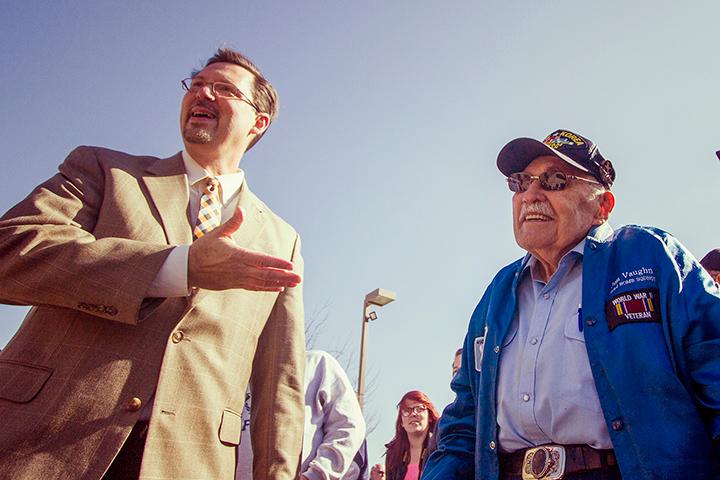 Even if you don’t know his name, you probably recognize Jim Vaughn’s face and the World War II, Korea and Vietnam veteran hat he always sports when on the OSU Institute of Technology campus.

Originally from Carey, Ohio, Vaughn was drafted in 1942 to the U.S. Army, and eventually the Army Air Corps., when he was 20 years old. He was sent to Italy as part of 10-man B-24 bomber crew in January 1944, but the plane was shot down a little over a month later.

Luckily, he and the other members of his crew were able to parachute out. Vaughn and several of the other men were found by allies and eventually flown back to the U.S. He went on to serve as a gunnery instructor and as part of an aerial medical evacuation team for the Air Force.

Vaughn, now 95, moved to Okmulgee in 1973 after retiring from the U.S. Air Force and started teaching at OSUIT’s School of Automotive Technologies.

“I was in my mid-50s and not ready for the rocking chair,” he said. “I said ‘I’m going to find a good tech school and teach there.’ I thought I would teach aviation or automotive. Someone said ‘Go down to Okmulgee, the Harvard of tech schools.’”

Vaughn visited the university, toured the automotive school and met with automotive instructors, but it wasn’t the first time he had been to campus.

Before it was a branch campus of OSU, the property belonged to Glennan General Hospital, a medical facility operated by Camp Gruber for wounded military servicemen and prisoners of war.

“I would fly in as part of an aerial medical evacuation team. We would fly patients across the United States and Europe,” Vaughn said.

When he retuned to campus three decades later as an instructor, there were still a few of the hospital buildings remaining, but many had been replaced to make way for newer facilities.

“I was destined to get back here. I loved teaching. People accepted me here. It was just the right place to be,” he said. “When I came back here, I knew where I wanted to be. I’ve never looked back.”

Vaughn taught until he was 66 years old but still likes to come back to campus, especially for the institution’s Veterans Day celebrations.

Vice President of Student Services Ina Agnew said Vaughn was one of the first people she met when she moved to Okmulgee.

“He is very friendly and proud to live in Okmulgee and proud to have worked at OSUIT,” Agnew said, and when he learned she worked there, he wrote her a letter. “In it, he wrote about how he came to be in Okmulgee, his love for his students and the automotive program, and how proud he was to have served his country.”

The upcoming Veterans Day parade and program at OSUIT will likely be the last Vaughn can attend. He is moving to O’Fallon, Illinois, to live in a retirement community just 15 minutes away from his son.

His daughter, Cheryl Brussow, came to Okmulgee from her home in Georgia to help her father recover after a bout with the flu and pneumonia about six months ago.

Brussow said, in addition to being close to her brother, her father has many other family and friends who live in that part of the country.

“It will make a little bit of everyday life easier. He’ll miss all the people here and the community of Okmulgee terribly,” she said, and Vaughn has already moved his Okmulgee Times delivery address to his soon-to-be new home in Illinois. “He’ll still be able to follow the news here. He won’t be out of touch; he’ll know what’s going on. It’s not goodbye, it’s till we meet again.”