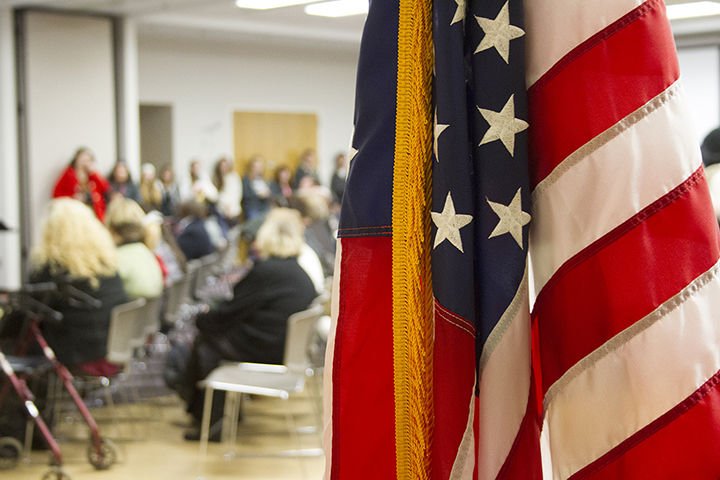 On Friday, Nov. 10, the OSU Institute of Technology community will once again commemorate Veterans Day and honor the U.S. Armed Forces’ veterans and active military members with a parade through campus followed by a celebration and Air Force Commendation ceremony.

The parade kicks off at 9:30 a.m., near the intersection of Wayne Miller Drive and Tower Road. The route goes west on Wayne Miller Drive, then turns south on Covelle Boulevard, then east on First Street before ending at Covelle Hall.

A flag ceremony and program follows with Sen. Roger Thompson on hand to present the Air Force Commendation Medal to Okmulgee native Sgt. James R. Frederick Jr., for outstanding achievement while serving as Fire Team Leader during the Vietnam War in 1969.

According to the commendation, Frederick performed security duties that included bare base defensive fortifications; tower and bunker guard; leader of security alert teams and leader of ambush and sweep patrols, which ensured mission accomplishment.

Chelsea Gann, a contestant on NBC’s “The Voice” vocal competition in 2016, will sing the national anthem during the program.

This year’s program keynote speaker is Don Boudreaux, a Vietnam veteran who served in the Army and was awarded the Purple Heart after being wounded in combat in 1968.

Sommer Farrimond, veteran services coordinator at OSUIT, said recognizing veterans on the OSUIT campus is crucial whether they are students or area residents who served a month ago or decades ago.

On Wednesday, Nov. 8, OSUIT will host a Vet Connect event from 10 a.m. to 2 p.m. in the Student Union. The event aims to connect local veterans to veterans’ organizations in the area.

“It will provide opportunities for local area and student veterans to have contact with facilities that they may not know about or have easy access to,” she said.

Farrimond said it’s important that the university honor all who are serving or have served in the armed forces.

“OSUIT has a rich history of serving veterans beginning with the foundation of the college,” she said.

Before it was a school, the OSUIT campus served as a military hospital for those who fought in World War II. In 1946, Oklahoma State University acquired the property and turned the facility into a technical and vocational school for veterans so they could re-enter the civilian workforce.

Tags
Veteran Services
Back to Top
©