VisCom Instructor Remembered As ‘Heart and Soul’ of 3D Program

VisCom Instructor Remembered As ‘Heart and Soul’ of 3D Program 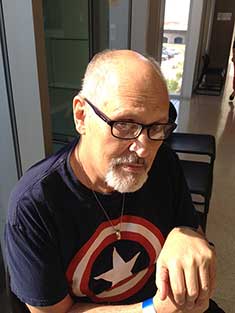 If you grew up watching cartoons in the 1980s and ‘90s, then Larry Latham likely played an important part in your childhood.

Latham, a native of Oklahoma City, was a producer, director and storyboard artist on a number of animated series and movies including “The Smurfs,” “Chip and Dale Rescue Rangers,” “DuckTales,” “The Snorks,” “Spider-Man,” “The Tick,” which earned him an Emmy nomination, and “TailSpin,” that garnered an Emmy win, just to name a few.

Latham, who lived in Broken Arrow, died Nov. 2 after a battle with a rare form of cancer.

After a successful career as an animator in California, he returned to Oklahoma in 2001 before coming to OSU Institute of Technology five years ago as an instructor in Visual Communication’s 3D Modeling & Animation program.

“We were all like ‘Wow, where did this guy come from?’” said James McCullough, Visual Communications division chair. “I don’t think people really understood what he was offering and what he brought to us.”

His students did understand.

“The heart and soul of the 3D program was Larry,” said Michael Lister, one of Latham’s students who will graduate in December. “His wealth of knowledge was unparalleled. No one could ever replace him.”

Tony Johnson, a Visual Communications instructor, took over some of Latham’s courses after he was diagnosed.

Johnson, who graduated from OSUIT’s Graphic Design program in 1997, actually got to know Latham outside of the university when his wife and Latham’s wife, Kelly Reynolds, were in a play together in Tulsa.

“We kept in touch. We helped start the Animation League of Tulsa. We would get together and talk about animation,” he said. “You don’t get access to that level of experience very often. I couldn’t ask for a better friend, but I got a great mentor as well.”

Latham was a mentor to a lot of students as well challenging them to do better.

“He was strict and was always pushing for more. He would say ‘Push yourself, you can do better, we can all do better,’” Lister said. “He was incredibly hard to please, but when you did it was like you had accomplished something great.”

McCullough said Latham was demanding, but he was always extremely generous with his students.

Latham loved teaching and interacting with his students, Johnson said. He was also a great observer and was able to see the promise and the flaws in people’s work and convey how they could build on those strengths and weaknesses to create something better.

“This business, visual communications, is a passion. You have to really love it and have a spark for it,” he said. “Larry loved to take that student who had that passion, that spark, but didn’t know what to do with it and push them to do things they didn’t know they could do. That was his magic.”