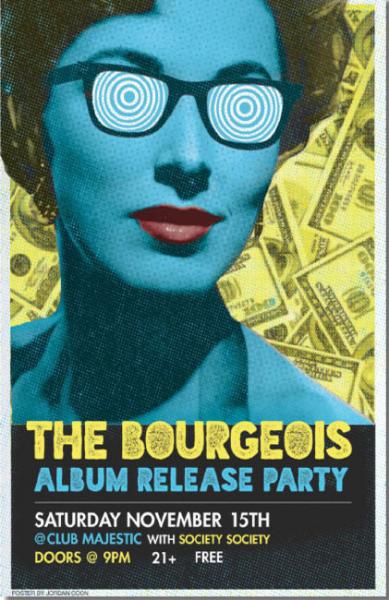 Jordan Coon, a recent School of Visual Communications graduate, took bronze in the Best Student Portfolio category at the recent Graphex 46 award reception in May.

The annual Graphex Awards, presented by Art Directors Club of Tulsa, recognizes the creative talents of commercial graphic designers, photographers, videographers, web developers, advertisers and writers from across the country.

The competition received about 130 professional entries and more than 40 student entries with more than 100 people attending the awards reception, which was held May 21 in Tulsa.

“It was an awesome experience. The whole night was a blast,” said Coon, who graduated from OSU Institute of Technology with an Associate of Applied Science in Graphic Design in April. “It felt good. Right out of school, to get that award for my portfolio work was icing on the cake.”

School of Visual Communications Chair James McCullough said it’s important that students take part in competitions so their work has a chance to be recognized.

“It’s validation for what they’re learning,” McCullough said. “It shows they’ve taken the skills they’ve learned both creatively and technically and put them to use, and that they can compete with anyone else out there.”

Kim Woodard from the OSUIT Office of Marketing & Communications won bronze in the In-House Design category.

Coon said he entered into Graphex as a student last year as well but came home empty handed.

“I didn’t let that discourage me. You grow and keep trying,” he said. “It can still be a learning experience and help you step up your game a little bit.”

It can be tough for students to submit their work into competitions like Graphex, McCullough said, because those contests are inherently subjective.

Coon agreed, saying that winning is rewarding, but that’s not the main reason why he entered his portfolio in the Graphex competition this year.

“I think it’s a great experience to go to these awards receptions just to meet people and see what’s out there, see what other people are doing,” he said. “It can make you push yourself and make yourself a better designer.”

Coon, who came to graphic design later than some of his fellow graduates, completed his internship at Walsh Branding in Tulsa and now works there full time. He credits his success to his instructors and the program at OSUIT.

“I went to OSUIT because I heard it was a good Graphic Design program. It was tougher than I expected but in the best ways. I feel really blessed that right after graduation I had a job,” he said. “The instructors care about their students, and if you work hard for them, they’ll work hard for you. I feel like a lot of the reasons I’ve had this success is because of what they taught me.”