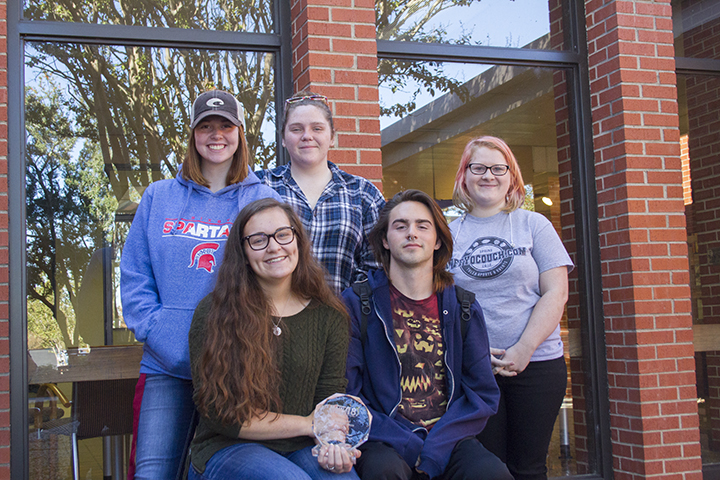 The title of the film may be “Awkward First Date,” but the judges didn’t find it too painful to watch because they awarded the short film— made by a School of Visual Communications team— first place in the adult division at the annual Okmulgee Main Street 48 Hour Film Festival.

This was the third year for the event, which challenges film making teams to write, shoot, edit and submit a four to six minute film in just 48 hours. The qualifying films were screened Saturday, Oct. 21, at the Orpheum Theatre in downtown Okmulgee.

After the clock starting ticking Friday, Oct. 13, three of the team members stayed up till 3 a.m., coming up with story ideas and writing the script. Everyone then met the next day to go over the script and start shooting.

“They texted me Friday night, ‘Hey, you get to be the lead,’ but they didn’t tell me anything about it,” said Salter, who played one-half of the couple on a date. “I decided I would try something new, get out of my shell.”

Like the title suggests, the film follows a couple on an awkward first date with the majority of the action happening in a booth at local restaurant Debi’s Filling Station.

Looper was a camera operator and said it was tough shooting with three cameras and a light in such a small space, but the owners of the restaurant were supportive of the project.

“We had four tripods all set up in one little area. And we had someone handling the sound. There was a lot of wiggling around to get to cameras and finding different ways to maneuver around four tripods,” she said. “I had a lot of fun with it. It was a little stressful at first. It was fun getting to work with everyone.”

Getting the entire film made from idea to final cut in just 48 hours had its challenges.

“It was complicated, it was long, it was hard getting all the shots,” said Barr, who wrote the script. “It was also super fun.”

Watching it at the screening with an audience was another big challenge for the film making team.

“Seeing it is a whole different experience than making it,” Barr said. “You watch it, and there are decisions you would change, but it came out really great. I’m really happy with it.”

Looper had a similar reaction while watching the film they made in a full-size movie theater.

“Seeing it on the big screen really brought it home that this is a competition,” she said, and when their film was announced as the winner all she felt was joy. “I was really excited. We did work really hard on it, and I had a great time making it.”