Visiting Chefs From Israel Get Taste of Oklahoma Cuisine

Visiting Chefs From Israel Get Taste of Oklahoma Cuisine 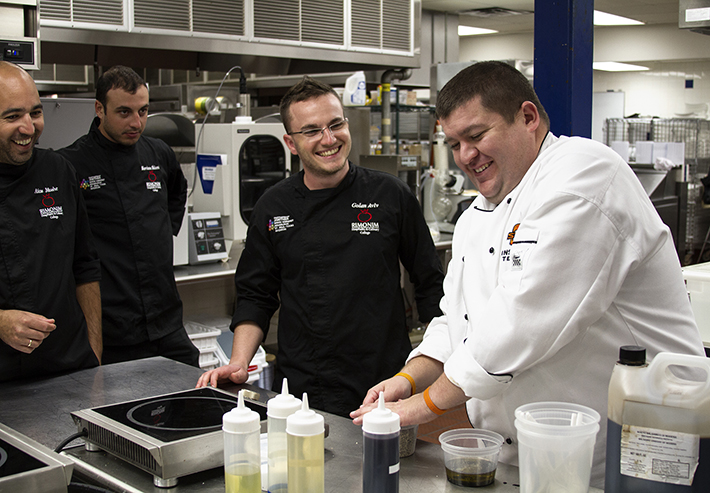 They say you learn a lot about a place and its culture through its food. For the first two weeks of November, four young chefs from Israel spent time at OSU Institute of Technology’s School of Culinary Arts to learn about the food and cooking techniques popular in the U.S., and Oklahoma, and in turn, to teach Oklahomans a little about Israeli cuisine.

Andrea Gardner, OSUIT’s international relations coordinator, said the visit signifies an important next step in a long-standing partnership with Oklahoma’s Jewish community. Working with Oklahoma Israel Exchange and Partnership2Gether, the Jewish Federation of Tulsa has supported culinary exchanges between Oklahoma and the Sovev Kinneret region of Israel for more than seven years.

Recently, the focus has evolved to culinary education and fostering cultural learning through culinary arts, and OSUIT’s School of Culinary Arts and Global Leadership & Faculty Development Academy have become the chosen partner to carry out such exchanges. In February of 2012, Chef Aaron Ware was hosted by Rimonim Culinary School in Tiberias, Israel, and last year he and fellow culinary instructor Celia Henley returned for a second visit. The next step was to bring young chefs to Oklahoma for a similar experience.

About 30 recent graduates of Rimonim applied to take part in the exchange. After several rounds of interviews and tests, four young chefs were chosen.

“We started to learn about the culture in America. The Jewish Federation and OSUIT staff took care of us,” said Chef Shlomi Marciano, who actually met Ware when he visited Israel and took his class on American breakfast. “The staff and the chefs were really nice. They treated us with lots of respect and understanding.”

“We got to work with foods that we’re not familiar with like pork and different types of seafood like scallops,” Golan said. “We studied smoking meats and melon carving.” 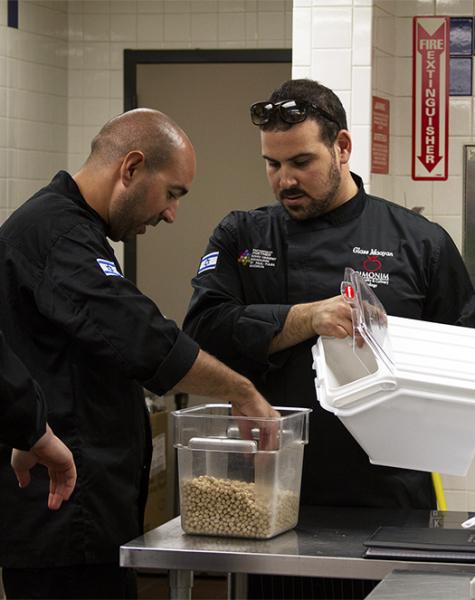 During the week, the chefs stayed on campus and attended hands-on lessons with instructors as well took part in culinary field trips throughout Oklahoma. On the weekends, the four stayed with Jewish host families in Tulsa.

“It was good for us to see how Jewish families in America live,” said Chef Moshico Atias. “It was the first time for us to come to America. We tried a lot of new things. We don’t have barbecue and a lot of fried foods in Israel.”

They also took part in several American cultural experiences like passing out candy to trick-or-treaters on Halloween and attending a University of Oklahoma football game.

“It was an awesome experience,” Marciano said.

The four chefs weren’t the only ones who had an educational experience during their visit. Those who ate at the Nov. 13 buffet in the State Room on the OSUIT campus were treated to variety of traditional Israeli foods prepared by the visiting chefs including zucchini and mint soup, stewed okra and braised Israeli brisket with root vegetable sauce.

The line for that week’s buffet went out the door as people sampled foods they may have never had before.

“Most of us cook in hotel restaurants and catering businesses, so cooking for so many people is normal,” Marciano said, but this was different. “Here, you got excited because you know people haven’t had this kind of food before.”

Gardner said the whole purpose of the exchange was for the chefs to not only professionally but also personally see and experience different ways of life. With such a successful first trip, she hopes the chef exchange becomes an annual event.

“This visit has already changed the way many of our students and faculty look at international relations as well. We now have a lot of culinary students asking to go to Israel and genuinely interested in another part of the world,” she said.