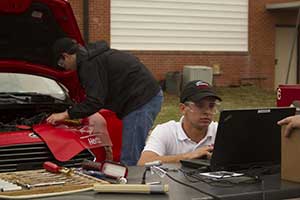 At the Ford/AAA Student Auto Skills Competition, held on the OSU Institute of Technology campus, the high school students go to their laptop computers as often as their toolboxes.

Ten two-person teams of high-school age technical center students from across the state had an hour and a half to diagnose and fix as many bugs as possible in 10 identical Ford Fiestas.

“They’re racing each other and racing the clock to find and fix a number of bugs deliberately planted in these Fords,” said Chuck Mai, AAA Oklahoma spokesman.

The teams are made up of the top 20 automotive students from technology centers across the state who scored the highest on a written exam. Those students together earned more than $130,000 in scholarships and grants.

The competition started as a way to get more students interested in a career as an automotive technician, Mai said.

“The complexity of vehicles today—you’re  not really a mechanic, you’re a computer technician,” he said. “That’s a little bit daunting.”

“It’s getting more and more sophisticated,” Voorhees said, adding that the term “mechanic” isn’t accurate for the career his students are preparing for. “We’re training auto service technicians.”

William Eubanks and Andrew Chapman from Eastern Oklahoma County Technology Center took first place at the competition and will move on to the national contest in June at the Ford World Headquarters in Dearborn, Mich.

Eubanks, a junior at Harrah High School, said the competition was fast-paced this year.

“All the teams were close; it was a nail biter,” he said.

A critical element to fixing and maintaining vehicles is computer technology, which is now as important as oil and gas when it comes to keeping cars running, Eubanks said.

“It’s the lifeblood. Without computers you can’t do anything,” he said. “Everything is computerized.”

Since the competition started 27 years ago, a lot has evolved in automotive technology, Mai said, including the home of the contest.

“We’ve had it on the steps of the Capitol, at the Mabee Center, at Quail Springs Mall in Oklahoma City. More than 10 years ago we moved it to OSUIT,” he said. “It’s really become a perfect fit. The Ford ASSET program is there. Students from the program can help.”

It’s a win-win for everyone, Voorhees said.

“An event like this showcases the university and our programs. Over half of our automotive students are coming from technology centers. These guys have a really good foundation,” he said. “They can come here and have a college experience. They can get a college degree in something they’re passionate about.”