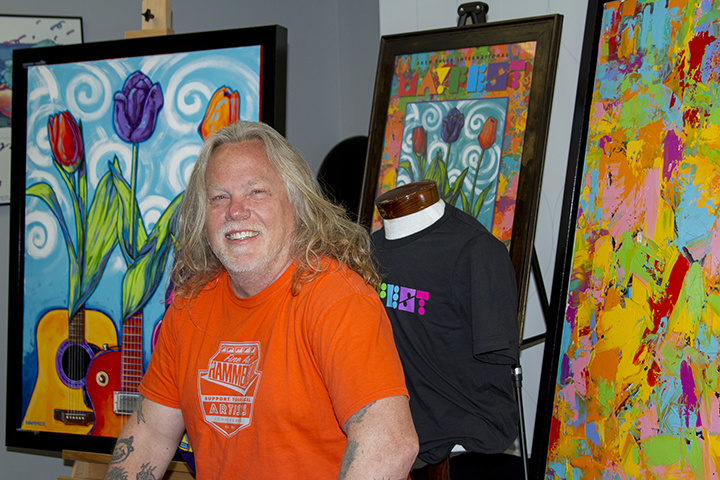 When OSU Institute of Technology alumnus John Hammer was asked to create the poster design for the 45th annual Tulsa International Mayfest, he turned to his own memories of attending the long-running festival for inspiration.

“It’s been a part of my life going back to the mid-80s. I saw Hanson perform; that’s one of my vivid memories of Mayfest. They were just little kids, but I remember thinking ‘these guys are going to be something,’” Hammer said. “I think about the art, but the music is what I really remember.”

Those memories were the inspiration for one of two original paintings Hammer created for Mayfest this year.

“That’s why I chose guitars because music is a big part of it to me,” he said. The painting focuses on three guitars with the necks of the guitars transforming into colorful tulips. “It’s music and the beginning of spring. When tulips come out, you know spring is here.”

The other piece Hammer created was an abstract painting with splashes of green, pink, yellow, purple and other spring colors. He decided to combine the two paintings for this year’s Mayfest poster.

Mayfest, now in its 45th year, is a free four-day outdoor festival in downtown Tulsa featuring hundreds of national and local artists and artisans as well as live entertainment from more than 100 musicians and performers across four stages.

The festival runs from May 17 through 20 in downtown Tulsa along Main Street between Third and Sixth streets.

Heather Pingry, executive director of Mayfest, said each year she and the festival chair choose an artist to design the annual poster and Mayfest artwork who has been involved with the festival in the past and has a connection to Tulsa.

After the initial thrill of being asked to be this year’s commissioned poster artist, Hammer said that’s when the fear set in.

Pingry said he had nothing to worry about.

“I love it. It makes me very happy because it’s so different,” she said. “I love the big picture. It’s so cool because it’s something we’ve never done before.”

Hammer, who graduated from OSUIT’s School of Visual Communications in 1985, worked as a graphic designer for nearly three decades. About five years ago, he started to pursue his dream of being an artist full time and since then has established himself in the Tulsa art scene for his pop impressionism pieces.

But his roots in graphic design haven’t left him. In addition to creating two paintings and the poster for this year’s festival, he also created a new colorful Mayfest typeset featured on a T-shirt and recreated his guitar-tulip painting in a simpler pencil drawing design so it could be more easily printed on T-shirts.

“It’s helpful to have that knowledge and background. I knew that not only was I creating art for Mayfest, but that it has to be used for T-shirts and posters,” he said.

That skill has been invaluable, Pingry said.

“John has touched anything and everything that would have his art on it— invitations, advertising. We have more T-shirt designs this year than ever before,” she said.

“It’s so nice to have someone with a graphic design background. They get deadlines, and they get that bigger picture,” Pingry said. “All the OSUIT graduates have brought a lot to the table. When they’re creating the artwork, you know it’s going to work.”