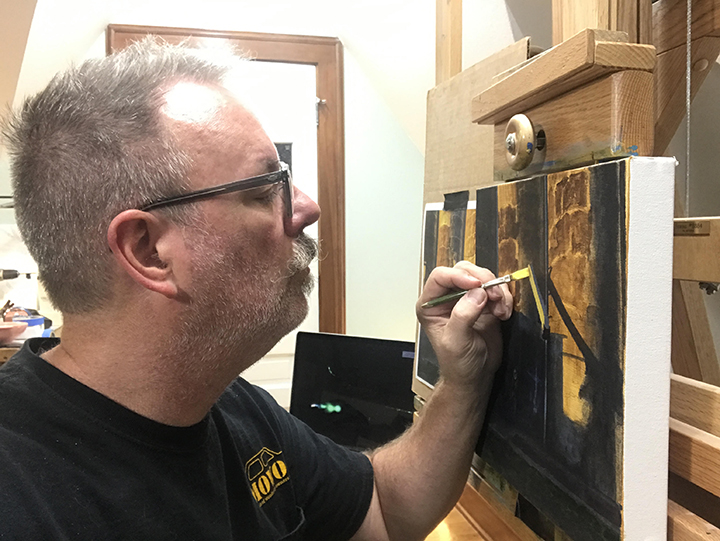 Dean Wilhite learned very early he was good at art and that he liked being the best at it.

“When I was in kindergarten, I remember being competitive in art. I discovered it was something I could do,” said Wilhite.

While in high school at Putnam City, he started attending a vocational school and taking commercial art classes.

“My instructor there suggested going to Okmulgee to OSU. He said that was the place to go if you wanted to go into this business,” he said.

Wilhite said attending OSU Institute of Technology was such a different educational experience than he had ever had before.

“It was such a big new thing where that’s all I had to do— art and design,” he said. “It was fun to be around all these creative people who were in the same spot I was. It was pretty awesome to be in art class all day.”

Wilhite graduated from the School of Visual Communications in 1980 not long after the name of the program changed from commercial art to graphic design. He worked as a graphic designer in Oklahoma City and is now senior art director at Ackerman McQueen.

Wilhite is returning to his alma mater as the next featured artist in the Conoco Gallery in the Student Union. The opening reception is Thursday, Oct. 19, from 6:30 to 8:30 p.m., and his pieces will be on display in the gallery through Dec. 15.

All through school and during the majority of his professional career as a graphic designer, Wilhite also nurtured his personal creativity through painting.

“I can’t sit still, so I have to do something,” he said. “Painting is a different animal. It’s using a different part of your brain. Painting, I do it for me, and it makes me happy.”

James McCullough, dean of the School of Visual Communications, said Wilhite is just the latest alum that has been successful in their professional life as a graphic designer while also feeding their more personal creativity.

“Students can see how they can use their artistic talents in a variety of ways,” McCullough said. “There’s a certain amount of discipline in doing both. Do you have the discipline to work for a client but also hone your craft and increase your skill set so it enhances what you do for you?”

Wilhite said he’s looking forward to his show at the Conoco Gallery at OSUIT.

“It’s going to be fun to have a different audience,” he said, adding that his pieces are meant to evoke a sense of nostalgia and love of the past. “I like old nostalgia and happy memories. I look for places and things that bring up those happy memories. Maybe it sparks a memory in someone else.”

Wilhite, who has served on the Visual Communications advisory board, says he likes to stay in touch with the school, and in fact, he loves overseeing the internship program at Ackerman McQueen.

“I take in all the interns, and I make them my kids. One of my first interns now runs one of the top graphic design studios in Oklahoma City,” he said. “Going to schools and giving a talk, helping students get a start. That’s what I’ve become more proud of than what I’ve done as a graphic designer.”