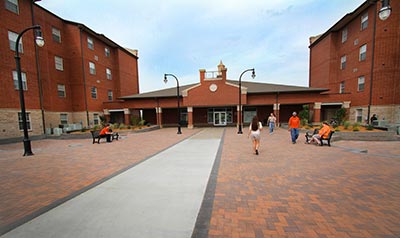 With the completion of the Wilson Commons pavers project, students can now enjoy beauty and functionality in the area between the Miller-Kamm North and South residence halls.

The inspiration for the project was two issues that plagued the area between the halls for years. First, the barren soil on either side of the existing sidewalk was a mixture of hard clay and rocks, unattractive to residents and prospective students. Second, minor flooding occurred after rainfall as the soil was unable to effectively retain water coming off of the parking lots in front of the buildings.

Engineers were able to create a design that solved both problems by installing a brick walking area with conversation pits on either side to serve as attractive community areas during nicer weather and catch pools during downpours. The pits were constructed with large drains to direct water away from the buildings and pipe it to ponds located behind the complex.

“I think it gives students a better sense of pride in where they live and respect in that they know we want them to have nice facilities,” explained Bo Hudson, residence coordinator. “We’re going to add more patio furniture as we go along but the biggest step was transforming this area that couldn’t grow grass well into a space that protects the buildings from flooding and looks really nice.”