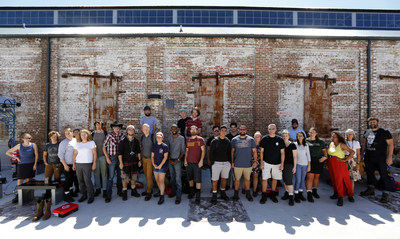 ROCKFORD, Mich., Oct. 26, 2017 /PRNewswire/ -- Wolverine, the brand synonymous with work boots and clothing since 1883, is shedding light on the skills gap with its third year of Project Bootstrap. Project Bootstrap is Wolverine's way of saying thank you to the women and men who keep the country running through their expert skills and strong work ethic. This year, Wolverine is supporting the next generation of trade workers by donating 2,000 boots directly to students at trade schools across the country.

Wolverine Project Bootstrap has partnered with television series, This Old House, to highlight the skills gap. Wolverine and This Old House recognized students from the American College of the Building Arts in Charleston, South Carolina to hear more about their skills, what the skills gap means to them and to deliver the first round of Project Bootstrap donations. "We are hard-working people and take pride in work that most people don't take much time to notice," said Jacob Jackson, a high school junior with a focus on timber framing at the American College of the Building Arts. "It's not every day someone walks up to you and tells you they appreciate you."

To further its commitment to close the skills gap, Wolverine has also donated $50,000 to This Old House's Generation Next initiative, a charitable campaign that encourages and empowers young people to join the skilled trades.  All contributions to this initiative – approximately $500,000 this year - support the mikeroweWORKS Foundation's 2017 Work Ethic Scholarship Program. "The skills gap is a real problem and we need brands like Wolverine to make significant efforts to help fix it," said Mike Rowe, CEO of the mikeroweWORKS Foundation and executive producer and host of Facebook's Returning the Favor. "If we don't invest in our future, the skills gap will continue to widen and we won't have enough trained workers to meet the demands."

According to an analysis by the Bureau of Labor, trade jobs account for 54% of the labor market but only 43% of the country's workers are trained in the trades.[1] "We are focusing on students this year as our own small way of addressing the skills gap and saying thank you for their hard work," said Andrew Shripka, vice president of marketing at Wolverine. "Before they start their careers in masonry, carpentry or one of the many other skilled trades, we want to equip them with appropriate work boots for their jobs."

Project Bootstrap is an embodiment of Wolverine founder G. A. Krause's belief in the possibility of opportunity, supporting employees and the importance of building for the future.  In 2017, Wolverine will be donating boots to trade schools across the country including American College of the Building and Oklahoma State University Institute of Technology. Wolverine is also offering a discount to all students currently enrolled in a trade school with a valid school email address. To hear more students about the students who are closing the skills gap, visit Wolverine's YouTube page.