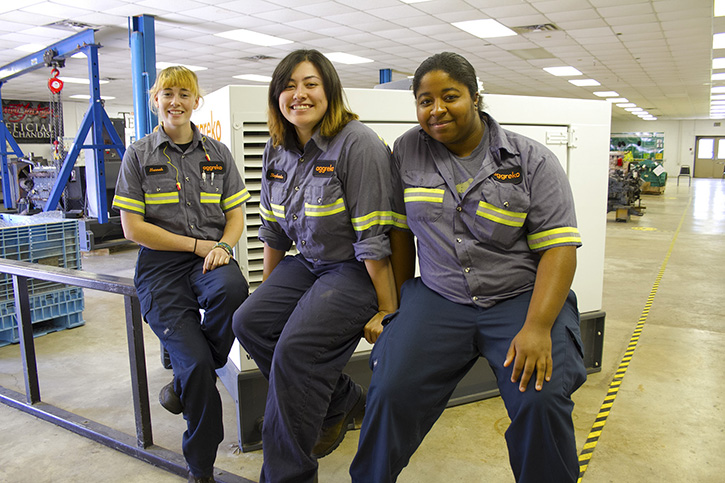 Being first has its advantages, but it can also have its challenges.

Hannah Vincent, Stephanie Bond and Anisa Harris are the first females to ever enroll in the Aggreko’s SelecTech program, which is only offered at OSU Institute of Technology.

Aggreko is the world leader in providing temporary power generation, temperature control and oil-free compressed air systems in more than 50 locations in the U.S., as well as in 30 countries across the globe.

And until recently, Aggreko had primarily been a man’s world.

“We’re in an industry designed for men, but it isn’t a hindrance for us,” Vincent said. “We’re proving that men don’t just fit this shoe. We’re throwing people for a loop.”

All three were in high school when an Aggreko recruiter paid their school a visit.

Vincent and Bond both attended the same high school in the San Francisco Bay area and were active in their school’s robotics and engineering clubs while Harris was attending an automotive mechanic program in New Jersey when they learned about Aggreko’s SelecTech program.

“I didn’t even plan on going to college,” Harris said, but Aggreko changed her mind. “I could go at a reduced cost, and I would get a degree, and I had a job guaranteed after I graduated.”

There were other perks too.

“The Aggreko program drew me in because it involved traveling,” Bond said. “I do like working with my hands and learning how things work.”

It was the same for Vincent.

“I liked the engineering aspect of the program, it’s a challenge. It’s applied, it’s hands-on, I’m seeing how it works,” she said.

Being the only women in the program hasn’t been as tough as they thought while on the OSUIT campus.

“Our instructors are more understanding than I thought they would be,” Bond said. “They want us to succeed and want us to do well.”

Harris said it’s the same for many of their male classmates, but it can be harder for them to express.

“There are guys who want you to do well, but don’t know how to show that support,” she said.

Their biggest challenges have come when they’ve gone out on their internships to Aggreko’s sites across the country. All Aggreko SelecTech students must complete four on-site internships.

“On internship, it still surprises people that we can do the work, but by the end I think we’ve changed some minds,” Bond said.

Terryl Lindsey, assistant chair of the School of Diesel and Heavy Equipment, said he’s glad these three are challenging the status quo.

“It’s a nontraditional path for females and that’s unfortunate. As far as our industry goes, we have so many jobs, the male workforce is just not going to be able to fill that void,” Lindsey said.

Now the industry has to adjust, he said.

“The workplace wasn’t designed for women. There were no female locker rooms, no female restrooms, but these girls are changing that,” he said. “I feel those three have more than proven themselves. They definitely raised a few eyebrows.”

All three, who will graduate from OSUIT in August, said they are glad they didn’t go through the Aggreko program alone.

“We’re all a really good support system for each other. We call and email each other because we’re the only ones who know what the others may be going through,” Bond said. “Times get tough, and you need that support system.”

Having three women selected for the program and then all three completing the program together means it will be easier for other women in the future.

Despite the challenges, all three are thrilled to graduate and start their careers as Aggreko technicians and hopefully usher in more females to the industry.

“I really hope I can go back to my high school to give presentations on Aggreko and say ‘If I can do it, you can do it,’” Bond said.