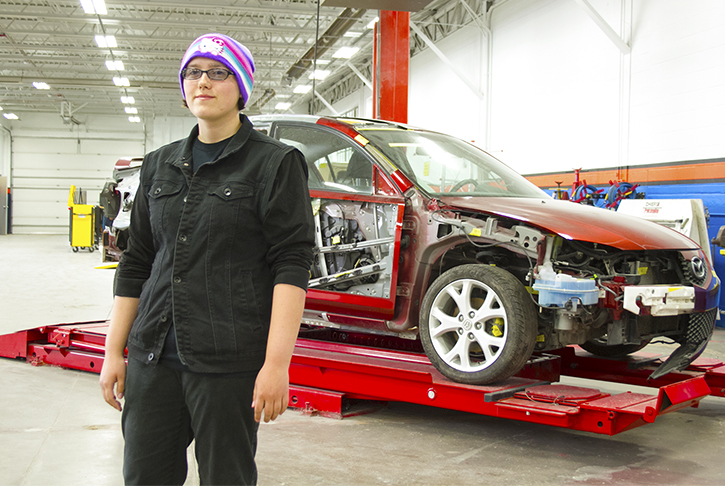 Growing up, Amber Powell looked at cars like other kids looked at puzzles and games.

“All three of my uncles, we’ve always worked on cars, fixing them up, playing with them. We think of cars as toys,” Powell said.

She found out about OSU Institute of Technology through one of her cousins who enrolled in the Electrical/Electronics program and came home to Delaware County raving about it.

“He was bleeding orange because he liked the program and the school so much so I decided to check it out,” Powell said, and by January 2014 she was enrolled in the School of Automotive Technologies’ Collision Repair Technology program.

Powell is one of only two women in the program right now, but it doesn’t seem to bother her at all.

“My uncles all had boys,” she said, so it was more of an adjustment to her instructors and fellow students. “People have a preconceived notion of what you can and can’t do. It’s an adjustment. They’re bewildered I can do this, but they also think it’s great.”

Stevon Gregory, assistant chair of the School of Automotive Technologies, said less than 3 percent of the automotive student body are females and he would like to see those numbers go up.

“They add a different social make up to the classroom and the industry’s environment that can be good for everyone involved,” Gregory said. “Over the years I’ve had a few women in my classes and they could often out-think and out-perform the men in the shop.”

Powell said so far, the only women she has encountered in the collision industry have worked in the office, not the shop where she wants to work.

“It’s really not that hard, you just have to be strong enough to lift some of the parts,” she said. “It’s more of a society thing where there are jobs men do and there are jobs women do. Girls like me who have grown up around cars are oblivious to it.”

Gregory said things are changing in shops and dealerships, but it’s a slow change.

“Some shops are more accepting, but some still are not. Some women find it difficult to maintain the heavy manual labor required, but that is changing as many tasks in the shop today are more computer related and focused on the diagnostics end of the spectrum,” he said. “As time passes I know women will become more accepted. The more women that enter the automotive field will hasten that acceptance.”

Powell said her family is happy that she is pursing the thing she loves.

“My uncles, they’re ecstatic, they’re proud,” she said. “They told me they wished they could have done something like this and turned their love of cars into a career and not just a hobby.”